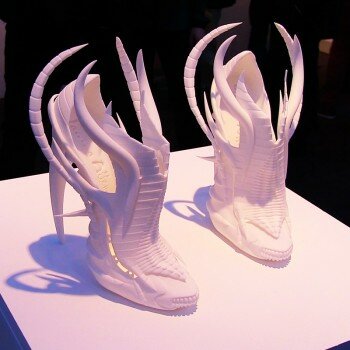 3D printed shoes by Janina Alleyne. This picture was taken in the 3D Printshow Gallery before the shoes were due to be laced up and paraded down a catwalk! (click to enlarge)

On October 19th to 21st 2012, the 3D Printshow was held in London. The first event of its kind in the United Kingdom, the show was billed as “a platform for the brightest minds in technology and design to come together”, and it certainly didn’t disappoint.

More than 40 of the big and smaller names in 3D printing were present, including 3D Systems, Objet, Makerbot, iMaterialise, Autodesk, Shapeways, Sculpteo, Europac 3D and Printrbot. Across three floors and multiple exhibition halls, a great many 3D printers worked away for three days solid producing all manner of objects before visitor’s eyes, with Formlabs even demonstrating desktop stereolithography.

Perhaps even more impressive than the array of working printers was the sheer number of 3D printed objects on show. These ranged from 3D printed works of art in the 3D Printshow Gallery, to industrial designs, lighting, Iron Man’s mask, 3D printed shoes (who told me they were impossible?), and both a human foetus and an Egyptian mummy 3D printed from scan data. The event even included a live show-within-a-show in which catwalk models wore 3D printed fashion, and music was played on 3D printed instruments (all of which I sadly did not have a ticket for!).

Like many, my personal take-away was an overriding impression that the 3D printing industry really is starting to come of age. As the sheer breadth of printers and objects on display demonstrated, many technologists and designers are now laying an incredible foundation for a startling transformation of the way many things are made. As the 3D Printshow’s brochure claimed “The Internet changed the world in the 1990s” — and as the event itself more than proved, fairly soon 3D printing is about to change the world again.

You can experience at least some of the show for yourself my video report as below. I’d place a fairly safe bet that there is at least something in the video that you have not seen before!