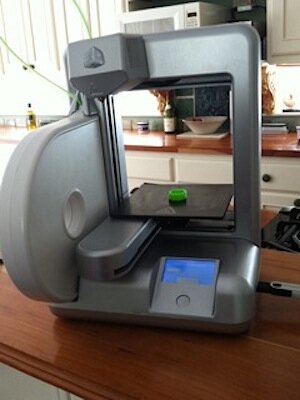 At the White House sponsored “Science of Digital Fabrication” meeting at MIT, Dale Dougherty, Founding Editor and Publisher of MAKE magazine, simply stated: “Digital Fabrication is about how to help people make things.” I was struck by the simplicity of the statement that reminds us it’s not about us techies or the machines. It’s about getting 3D Printing out into the hands of the mainstream market so they can MAKE things. This group is not comprised of tinkerers, but rather everyone from young kids to senior citizens who want to use the new machines to make “almost” anything you can imagine. They don’t want to make or worse yet, fix, a 3D Printer.

A recent experience I had taking a Cube 3D Printer on a road show demonstrated that its maker, 3D Systems Corporation, understands the design requirements for a mainstream 3D Printer. Rugged, reliable, easy to use, plug and play. That’s what a 3D Printer has to provide if it’s going to be in someone’s living room or schoolhouse.

I had a number of demonstrations on 3D Printing to complete and I wanted something small and easy to set up. Graciously, MicroFab Lab in Lanham, MD offered to loan me a Cube. That’s where the tests started. As an employee was walking in to give me the personal-sized printer, he dropped the box, and the Cube fell onto the floor. We picked it up and it was running in a few minutes. I had 10-minutes of instruction and I was able to run it immediately. Ok so I AM a techie, but still. NO fuss, no muss operation.

I then drove the machine over potholes in New York City and Boston on my trip North to an Engineering Week Expo in Maine. At every stop the little machine started right up after sitting in the cold, gave me no problems, and performed like its bigger industrial brothers. At the Expo, we had simple expo tables that are not sturdy, and although kids were continually knocking into the table from the kinetic game they were playing, the Cube never lost calibration.

When we design for mainstream markets we are really designing for the application or end use. I don’t want to spend time working on tools; I want tools to do a job for me. The Cube meets that requirement.

I’ve gotten a lot of flack from my maker/hacker friends when I’ve raved about my Cube experience. It’s expensive, they contend, and you must buy the more expensive materials from 3D Systems since it’s a cartridge and not an open spool. But for a new maker, a cartridge is foolproof. When I hear from company executives that open spools are easy to install, I hear someone who is relating to only their own experience and not to the customer’s perspective. Easy for you, but perhaps not for the mainstream maker. Convenience is worth a fortune; we pay for it everyday, to companies that recognize its value to a market.

Yes, the Cube has a small build area, and produces only one color at a time. Yes, the material is more expensive and can only be sourced through the manufacturer.

But the middle-aged schoolteachers and little kids who saw my demo were wowed. The Cube captured their imaginations. And that’s because instead of tinkering and trying to make the 3D Printer work, we made some cool things for every one to take home! If 3D printing is to become mainstream, we need to capture the world’s imagination, part by 3D Printed part.

For information on the Cube and other 3D Printers, lesson plans and other teaching ideas, how to start a FabLab and lots of other cool help for beginners visit our non-profit friends at FabLabHub.