Millergan Lowe of Leicestershire was born with only one functioning hand.

Here he is back in March in a photo with his dad: 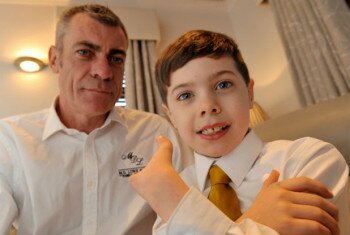 While Millergan has managed quite well, his new bionic hand will allow him to do things he has only dreamed of doing before, including tying his own shoelaces.

“It will make a huge difference to Millergan,” Mark said.

“It won’t be a question of him just putting it on and using it. He will have to learn how to make it work but I am sure he will.”

The bionic glove was an international effort of sorts.

E-Nable America, an American charitable group, contacted a designer in Dublin who created the hand and used 3-D printer technology to make the hand a reality.

The bionic hand was then shipped to Millergan by post.

The brightly colored hand has already been put to good use by Millergan who is now learning to do things 2-handed for the first time in his life.