We reported earlier this week on the ending, possibly for good, of the US law prohibiting the printing of plastic or otherwise undetectable guns.  Although many were hopeful this was not to be.  By an overwhelming majority the Undetectable Firearms Act was renewed for another 10 years earlier this week putting a nail in the 3D printed firearms coffin, sort of.

The law requires a minimum amount of x-ray detectable metal parts in any firearm produced inside the country.  This leaves door open for 3D printed guns that contain at least 3.7 ounces of metal parts. The law also does not stipulate these metal parts have to non-removable, a significant loophole in a law written to increase security. While this means the gun will not be entirely 3D printed it does give some enthusiast a little hope. 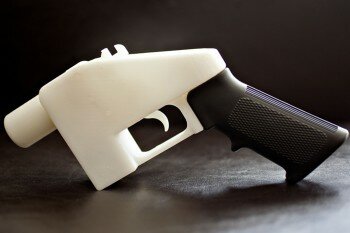 After passing the law Representative Steve Israel, who is pushing a separate bill requiring the metal parts to be non-removable, released a statement saying “I am pleased that the House passed a 10-year re-authorization of the Undetectable Firearms Act, because I believe it is an essential first step in keeping Americans safe from the threat of plastic guns.”

It was not just America that made 3D printed firearms harder this week.  Across the pond the British government also updated its rules on 3D printing guns, and their new regulations are a lot more specific.  They outlawed the printing of unlicensed 3D firearms and added a 10 year prison sentence to anyone who breaks this law.  They also extended this to include individual parts of a gun as well as the firearm as a whole.

While this does leave the door open for licensed 3D firearm production, it must be remembered that England does not license any firearms for the public.  So the allowing for licensed printing really only pertains to manufacturing of weapons for the military or some specialized law enforcement agencies.