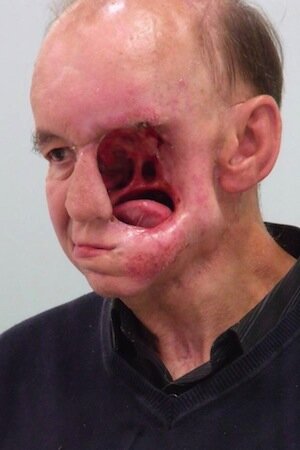 Eric Moger’s surgery took most of the left side of his face with it, including his eye, cheek, and much of his jaw.

From hearing aids to prosthetics, 3D printing has been having a major impact on health services. In most cases, 3D printing has just been improving the production process of a service that already exists, making it faster and cheaper. More recently however, 3D printing has delivered totally new health services, like non-invasive nose prosthetics and living-tissue ears (still in development). Eric Moger got cancer in his face though, and the surgery to remove it took most of the left side of his face with it, including his eye, cheek, and much of his jaw. Thankfully, Moger was able to take advantage of 3D printing, and now he has an all new face.

The surgery that saved his life left a large hole in his face that exposed the inside of his mouth; this made it difficult to speak without him holding his jaw with his hand, and it made it impossible for him to eat and drink normally. His disfigurement would also make people uncomfortable when he went out, and that’s a whole other pain to deal with. Since he was receiving chemotherapy and radiotherapy, plastic surgery wasn’t working (I assume because of the weakened immune system). So his surgeon referred him to Dr. Andrew Dawood, a dental surgeon that uses 3D printing to replicate his patient’s jaws to practice surgical procedures.

Dr. Dawood performed a CT scan of Moger’s skull and face, and then extrapolated what the missing parts should look like. That extrapolation was then 3D printed in nylon, a couple titanium rods were added to Moger’s jaw to mount the prosthesis, and viola, he had a new face! A special plate was also printed to create a seal at the the top, allowing him to regain functionality as well as his appearance; he previously had to have all his food and drink piped directly into his stomach, but the printed face let him drink water for the first time since his surgery: “When I had that first glass of water wearing the prosthetic face, nothing came out – it was amazing.”

So how does it look? 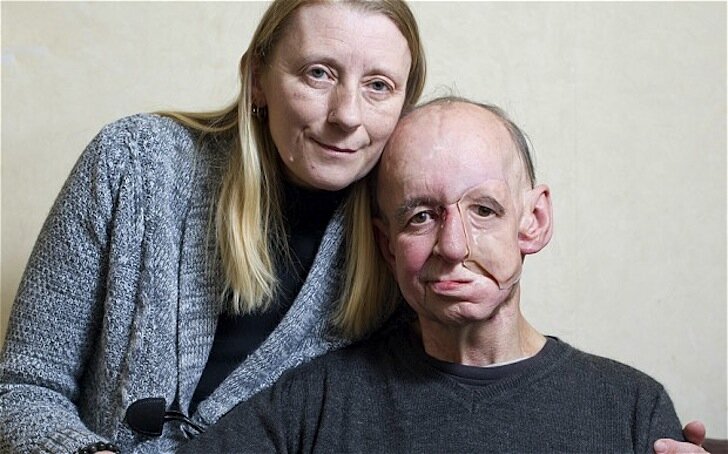 Moger seems rather pleased, saying “I was amazed at the way it looks. When I had it in my hand, it was like looking at myself in my hands. When I first put it up to my face, I couldn’t believe how good it looked.” That sounds pretty good. It reminds me of the ZPrinter face, which is eerily accurate. If you legitimately need a new face though, you’ll want accurate, and it’s good to know 3D printing has your back… err, front.