On 7th to 9th November the latest 3D Printshow was held in London. Exhibits included Jim Kor’s Urbee car with its 3D printed body, full-size 3D printed dinosaur heads from CreaZaurus3D, a hospital space showcasing 3D printing medical applications, and much, much more! You can see the scale and scope of what was on offer in my video report:

A year ago the first ever 3D Printshow had been a truly signature event, and I was hence intrigued to find out just what the organizers could deliver for their second London extravaganza. As expected, the majority of the major players in the 3D printing industry were present, with all kinds of 3D printers and printouts on display. This said, the 2013 3D Printshow had a very different feel to its predecessor.

Back in 2012, 3D printing was just entering the public and media consciousness and had little to prove. But as we approach the end of 2013, 3D printing is very much entering the mainstream. Reflecting this, the event was not just far bigger, but felt more like a traditional tradeshow. On average, the exhibitors also seemed to have a somewhat more commercial focus than last year. In particular, many of the new consumer-grade 3D printers on display had far more polished designs than those we have seen to date. I was therefore left with the feeling that an industry that is already nearly thirty years old is now starting to seriously mature.

Two printers that particularly impressed me with their form as well as function were the Ultimaker 2, and the BeeTheFirst from Portuguese manufacturer BeeVeryCreative. The latter was without doubt the best looking printer at the show. It also has a clever pull-up handle so that, as a company representative told me, it is easy for people to take it home from work in the evening! 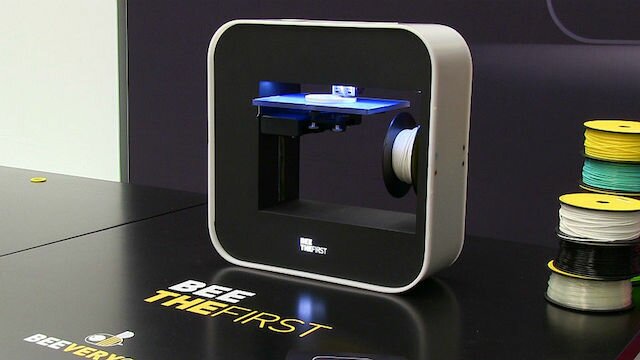 As industries grow, so their suppliers also succeed — and clearly making a profit from the 3D printing industry right now are the vendors of LEDs. I say this because the BeeTheFirst and a great many other new printers were all liberally festooned with the little lights to make them look prettier while printing. More fundamentally in terms of technology, Form Labs had several working Form1 desktop stereolithographic printers on display, while colorFabb had a stand showcasing objects made with their new WoodFill filament. In fact, watching a wooden-panelled Ultimaker Original printing out WoodFill objects was one of my most lasting impressions of the show. 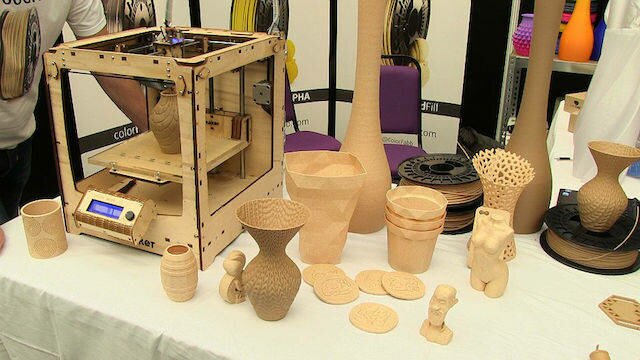 Also very impressive were several printers from the World’s Advanced Savings Project or ‘WASP’. One of their very large Delta printers is capable of extruding clay, and was making a very good job of it indeed. In time the idea is that enormous 3D printers will be able to output clay buildings in the third world. 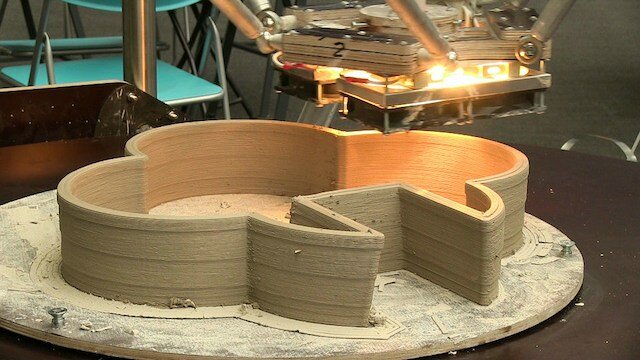 Also fascinating to see in operation was an Iris 3D printer from Mcor, which creates color objects using standard copier paper to form layers via sheet lamination. Aside from the Iris, the Form1, and a solitary Connex 260, every other printer at the show was based on material extrusion technology, and this sadly risks perpetuating the common belief that 3D printers can only make things out of plastic or other extrudable materials. This said, large powder-based and photopolymerization printers are rather large to transport and require complex installation. As I discussed with Tatiana De Wee from i.materialise, while bringing one of their Mammoth stereolithographic printers to London would have been a showstopper, it was simply not a realistic proposition! For some time to come, visitors to events like the 3D Printshow therefore need to remember that most of the really cool objects on display will have been produced on very different hardware to that physically present.

Only a year from its first outing, the 3D Printshow was without doubt bigger, better and more successful than ever. Like many, I will be reflecting on just what I learned from my visit for some time to come. Meanwhile, the show now moves to Paris to play 15th and 16th November, before crossing the pond to New York on 13th to 15th February 2014. You can find out more at 3DPrintshow.com.

UPDATE: The author put together an extra video on the show after this article was published, and we include it below: