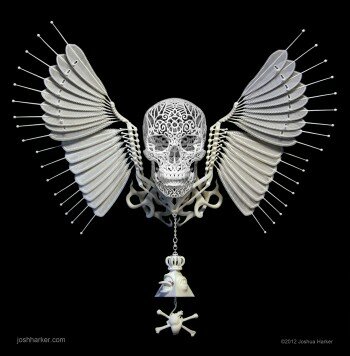 A large number of Kickstarter projects over the last couple years involved 3D printing. Some created 3D printers, and some used 3D printers to create their product. One of the most successful people who have utilized 3D printing in a Kickstarter project is Joshua Harker. You may not recognize the name, but if you’ve hung around Kickstarter or Shapeways, you’ve likely seen one or both of his models. His first project was the 2011 Crania Anatomica Filigre sculpture, a white human skull, with a tattoo-like feel to the design. The project raised over $77,000. Following on that success, Harker launched his Anatomica di Revolutis (roughly translates to Anatomy of a Revolution), which at the time of this writing has 60 hours to go and has so far raised about $35,000 (of his modest $500 goal). This 3-piece model “symbolizes liberty & prosperity through an empowered participatory populace. It is designed to hang on a wall or other vertical surface.”

Both of his projects utilized 3D printing service Shapeways to produce his models. He recently visited this factory of skulls and they took the opportunity to record his experiences on video. The interview covers what it was like starting and running a project on Kickstarter, the process of working with Shapeways, and how the combination of the two changed the direction of his career.

Between crowdfunding at sites like Kickstarter and on-demand product creation via 3D printing services like Shapeways, it’s become possible for artists, designers, inventors and other clever people to reach a massive audience with little or no capital investment or risk. The barriers to starting a business or moving a career forward are gone, and anyone with an idea and a skill has the potential to launch a successful venture.

The video at the top of the article is the full 15 minute conversation. You can find a shorter, edited 7-minute version here .

If you are unfamiliar with Parker’s projects, here is the original pitch for his Crania Anatomica Filigre project:

And here is the pitch for his current Anatomica di Revolutis project: