There’s plenty of controversy around 3D printing patents, but a good indication of what a company might do in the future is what patents they hold. In the case of Apple, that means that we can logically expect the smartphone giant to incorporate 3D printing into the business model of producing personal electronics. A handful of Apple researchers recently filed several patents with “Layer-by-Layer Construction” in the titles, including language like “Amorphous Alloy,” “Bulk Metallic Glass,” and “Manipulating Surface Topology of BMG Feedstock.” 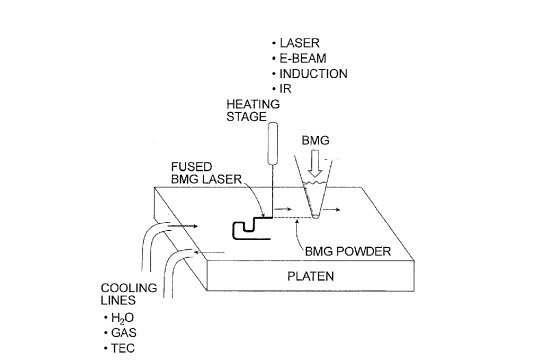 Bulk-solidifying amorphous alloys, or bulk metallic glasses (“BMG”), are a recently devised form of metallic material. They are amorphous at room temperature and remain non-crystalline after cooling. This makes them much stronger than steel, an impressive trait. Unfortunately, BMGs are difficult and expensive to process into three dimensional shapes. That’s where the Apple patents come in; by fusing layers of BMG through laser melting or electron beam melting, producing 3D objects out of the amorphous materials is made more efficient.

Due to the complexity of the patents, this technology will likely be used for manufacturing and not desktop printing. It’s possible that such printers could produce touch-sensitive (conductive) cases that are both aesthetic and durable. Reducing mechanical buttons makes cosumer electronics easier to produce, more user friendly, and longer lasting. With as many iPhones, iPads, and MacBook Airs that Apple produces, it follows that the company invests in more automated systems, especially considering all the heat taken over Chinese labor scandals.

Of course, Apple becoming more familiar with 3D printing at any level means it’s possible that we’ll eventually see consumer-oriented printers with that iconic bitten apple on them glowing proudly. And this isn’t the first insight into the future provided by 3D printing patents. iRobot, producer of Roomba, the automated floor cleaning robots, filed a patent for a 3D printer equipped with robotic arms that do all the post-print clean up and finishing. That will be a major time saver.