Just two weeks ago we wrote about Arcam AB (AMAVF), the recent IPO of a Swedish manufacturer of high-end, specialty 3D printers that print in metal. It had been brought to the attention of investors the prior day when someone wrote up the company on the Seeking Alpha website. After that positive piece, the stock immediately rose about 35% on the next day, from an open of $12.47 to a close of $16.85. For the next seven trading days, it traded between $14.50 and $15.75. I had traded some shares within that range for a small profit. These were trading shares, not purchased for a long term investment; just a momentum play. 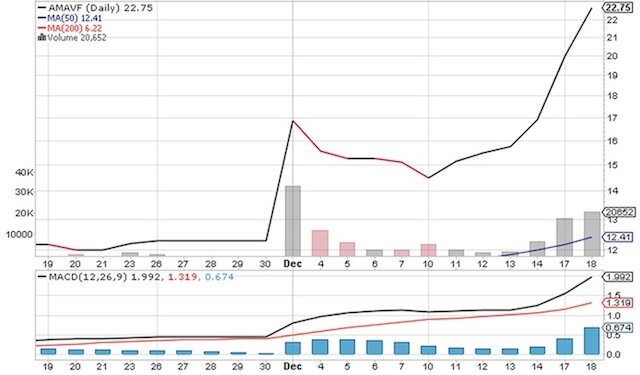 I would have hung in there longer but the stock didn’t show the price action or volume I wanted to see during that 7-day stretch. As I mentioned in my December 4 article, you have to be very careful with microcap stocks that are so thinly traded. And when I say thinly traded, I mean that I don’t think I had ever seen one with this lack of volume — in all of November shares only traded on five days for a total of 3,000 shares. In fact, when I purchased my own shares, I remember accounting for nearly half of the day’s volume at the time. So, seven days was enough time to wait for an upward trend to develop.

Well, darn it. I should have stayed in for eight days! The day after I sold, the same author wrote another story on Arcam, published December 14, where he reported what he deemed a positive outlook for Arcam. The stock jumped to $16.90 that day, $20 the next and today closed at $22.75. Arghh. But I’ll tell you what, if I were still in it at the open today, I would have sold at my first opportunity. Not that there is anything wrong with Arcam — I’m sure it’s a fabulous company — it’s just too much of a rise for a stock with no fundamental news driving it.

You see this price action alot with very small microcap stocks, that have small floats, very low volume, a low stock price and hype in the press. Prices can shoot up quickly and fall just as fast. And more specific to this market, people are so excited about 3D printer stocks, and so many feel they missed the boat on 3D Systems (DDD) and Stratasys (SSYS), that they can’t help but jump on the hope of getting in on the ground floor of an undiscovered 3D printer company.

And what investment house produced the report on Arcam? Must have been Merrill Lynch or Morgan Stanley or another of the big boys in order to push the stock so high, right? No, it was just an author on Seeking Alpha, a site that let’s all comers submit an investing article, and I see that he has a total of three articles to his name on the site, two of which are the ones on Arcam. Not taking anything away from him; he sounds like a smart guy. All I’m saying is 1) of course, do your own due diligence after reading it, and 2) realize how volatile this stock is if an unfollowed author’s articles can nearly double the stock price.

I’m not writing to recommend that you buy, hold or sell the stock. I’m only writing this because many readers of 3Dprinter.net are probably not experienced investors, and these 3D printing investment opportunities are tempting, and I want to make sure readers understand the risks of thinly traded microcaps. That’s all. If you are an investor who knows what you are doing, have analyzed the stock, and feel it’s a great investment at this price, that’s great — buy and hold on.

But, hell, what do I know, I got out at $15-something and left a ton of money on the table. But no one can pick the bottoms or the tops, you just try and catch a good part of a run while controlling your risk. In retrospect, I should have held a couple more days; but then I think, what if that second article would have been a negative one rather than a positive one? It would have been difficult to get out of the stock before it dropped.

Arcam has risen 82% from the open on December 1. It will be interesting to see what Arcam does the second half of the month. We’ll check back in then.

Disclosure: I do not own any shares of Arcam at the time of this writing. I do own DDD SSYS (and ONVO).

Mark is the founder of 3DPrinter.net. He encourages anyone reading this to submit their own article for publication. Connect with him on his Google+ account. View all posts by Mark Fleming »
« This is not just a ferris wheel, it’s a glimpse into the future
My subjective guide to 3D printed fashion »