Last month, a new company by the name of botObjects announced the ProDesk3D printer. If the specs were to be believed — promising full-color printing in a desktop printer at a cost comparable to a Makerbot Replicator 2 — the 3D printer industry was about to be turned upside down.

The press (including us) was jumping up and down over this huge leap in technology. But some were skeptical. Problem was, there was no prototype, no videos of it in action, just one photo, and a bare minimum of specs. Quite a few checked their enthusiasm until they could see something concrete from the company. It just sounded too good to be true, and to some most definitely impossible for that price.

botObjects has released their specs, along with some photos of the full-color models that were printed from the ProDesk3D. But as it turns out, the release of this further information is raising even more suspicions. Missing are any detailed photos or even one video of the printer. And even the photos of the printed models are controversial. That lead quite a few bloggers to further question if this is a real product or some sort of over-promised hype, or worse. In fact, it got Josh Mings over at SolidSmack to question if botObjects actually photoshopped prints.

From Josh’s excellent article on Thursday:

The prints are claimed to have been printed by the ProDesk3D and the software screenshots give a hint of the options and ‘Color Model’ wheel where (we assume again) you select the desired colors for your 3D print…Now… ok… I’m sorry, this is all I can take. These are so Photoshop’d it’s ridiculous. I’m actually offended that it is expected for people to believe these are un-edited images. Perspective, shadows, lighting… all off. Are they real prints? More doubts, more questions. I’ve never seen an FDM print without the slightest hint of layering. These show none whatsoever. At the most this shows that a single color is fed through followed by another color for a layered effect. Otherwise, a vertical color shift would be shown, not simply a horizontal shift. No, this is more an exercise it photo-manipulation, vaporware product renders and vector art mock-ups–and most likely the reason we are not seeing this on Kickstarter, since Kickstarter changed their policy on product renderings.

Mings was commenting on the three photos that botObjects released, and we’ve included them below. The guys at SolidSmack seem to really know their stuff, so I’m taking what the he says seriously. I’d like to hear from any readers who use Photoshop, with their opinions. 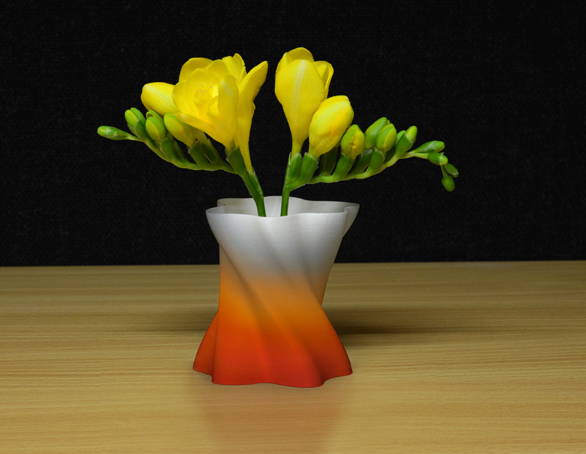 To be fair to the company, he’s contacted botObjects to give them a chance to rebut his claim. But I see that there has been no response from the company thus far. And the two parties are not strangers, they have each others’ numbers — Josh interviewed the founders of the company last month.

The unfortunate part of all this is that botObjects has begun taking preorders. Buyer beware. As with any purchase, we advise that you wait to see the final product before handing over your credit card.

Here’s are the full specs of the ProDesk3D:

Can’t wait to see how this all plays out.