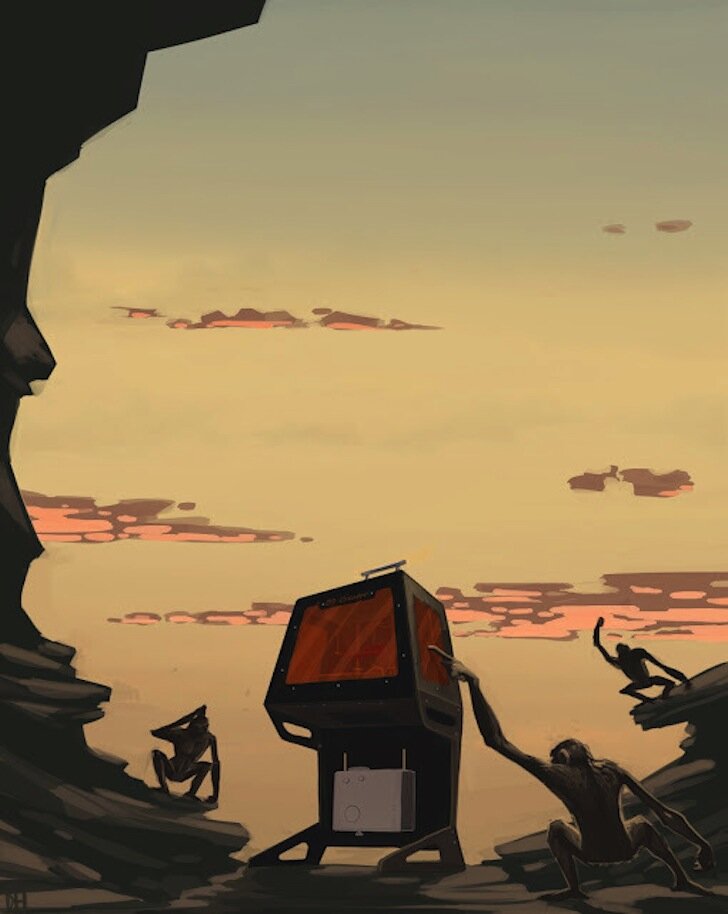 The Dawn of the 3D Printing Age – Art by Dennis Harroun.

The quality difference between the output of fused deposition modeling (FDM) and stereolithography (SLA) 3D printers has been shrinking, but it’s still pretty dramatic; SLA produces much more detailed objects. The process involves beaming a DLP image at a bed of UV sensitive resin, curing it a layer at a time. Light rays are obviously more controllable than a heated nozzle, and this is why there’s a quality difference. The B9Creator uses a home movie projector, which is mounted below the VAT where the object is formed from the top down, the opposite direction of FDM printing. The B9 was originally funded on Kickstarter in June of last year, and about 200 people now own one. It’s back on Kickstarter for some upgrades though.

You can read the details of the improvements here, but there are three separate upgrades: a larger VAT that eliminates the need of a reserve resin bottle, machined slide rails and a Z-decoupler (increases print quality), and a new backplate that has the holes predrilled for the previous upgrade. The first two upgrades can be purchased separately ($101 and $173), and the third is just the combination of them with some new hardware ($277). Anyone that buys a full B9 kit gets the upgrades by default.

The kits are going for $2,795, and only basic tools are needed to put it together. That’s cheaper than the $3,299 that the fully assembled Form 1 will retail for. The fully assembled B9 is running for $3,595. There’s only nine days left, but the campaign has already met its goal by about 800% at almost $200,000. Unlike the Form 1, the B9 is open source and uses nonproprietary resin; if that appeals to you and you were torn between the two, the B9 is even better than before, so maybe that will help you make your decision.