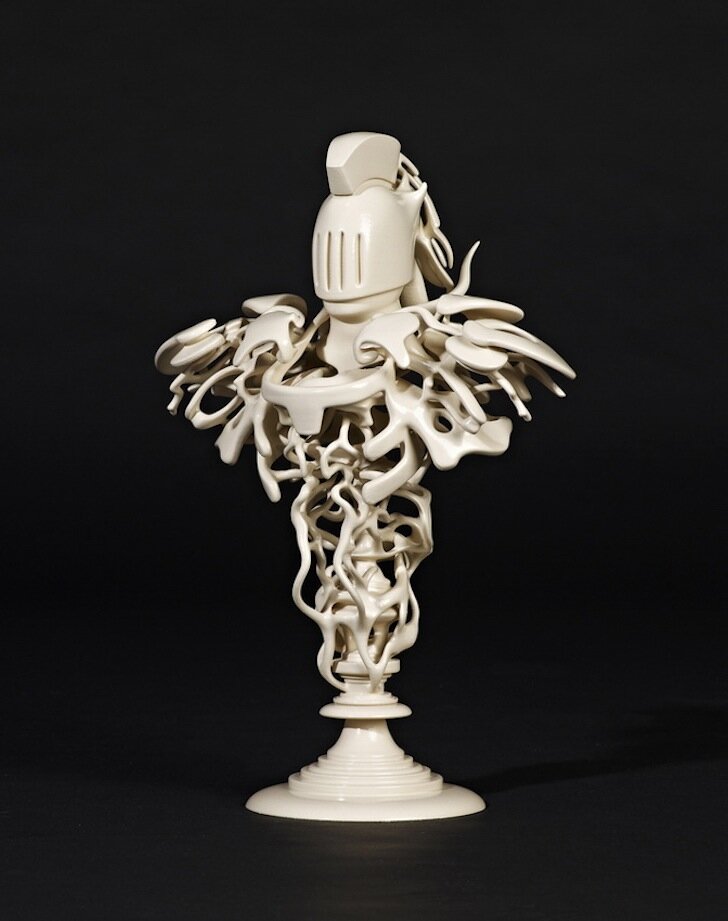 With close to perfect scores from all three show curators, Belgian multi-media Artist Nick Ervinck’s 3D printed sculpture RACHT was named Best in Show for the Bits to Its Juried 3D Printed Art Show. The show opens on April 27 at the Landing Gallery in Rockland, Maine and was organized by the non-profit Fab Lab Hub.

Upon hearing of the prize, Mr. Ervinck commented, “I don’t just want to use 3D printing as technology … but to challenge the possibilities of the technology … almost like flirting with the machines!” Israeli Judge Asher Nahmias aka Dizingof recognized this element of Mr. Ervinck’s work and says, “His intricate sculpture displays the powerful fabrication capabilities of 3D printing technology. I trust he will continue to push its boundaries further. Great to hear the 2 other judges, Ping [Fu] & Joshua [Harker] had the same impression as I had on Nick’s beautiful work!”

The Best from Maine award went to Mary Baldwin Collins for her piece, American Icon #1

Judge Joshua Harker explains, “My scoring was based on 3 criteria: Creativity, Aesthetic Beauty, & Utilization of Technology. I based my Creativity score on the originality of the piece as well as the difficulty & or complexity of realizing it 3 dimensionally. Preference was given to forms that were not generatively designed. Aesthetic Beauty scoring was based on perceived skill in the execution of the modeling & my personal aesthetic sensibilities. I weighted this to reward pieces that showed control in form & composition. Utilization of Technology was scored on the necessity of using 3D printing technology over other processes as well as how clearly the finished piece illustrated the benefit or necessity of using the medium. Nick Ervinck’s RACHT best demonstrated each of the 3 criteria & I scored it accordingly.”

The Best from Maine award went to Mary Baldwin Collins of Rockport, Maine for her piece, American Icon #1. Ms. Collins who had never worked with 3D printing before describes some of the inspiration from the technology: “The question of 3D printing as art was the jumping off point and I was then able to examine many other concepts in an untraditional way. This was just so much fun!”

Other artists whose entries were accepted for the show include Australian Henry Segerman and Americans Andrew Werby, Arnold Martin, Jim Stanis and Roberta Baumann.

The Bits to Its show opens with a private reception at the Landing Gallery as a fundraiser for the Maine FabLab. The public opening is Friday May 3 and will run through June 16.