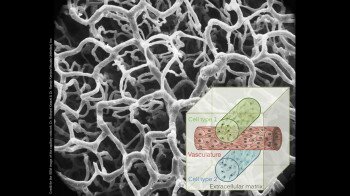 Scientists at Harvard University Wyss Institute have just announced that they have found a way to 3D print human tissue – with blood vessels.

While there has been monumental progress with 3D printing tissue, the integration of blood vessels into the tissue is an important breakthrough for scientists. Until now, tissue has been printed has lacked essential blood vessels that are necessary for sustaining the tissue.

“This is the foundational step toward creating 3D living tissue,” said Jennifer Lewis, Ph.D., senior author of the study.

Organovo, the 3D biotech company that has produced strips of liver tissues, has so far been able to sidestep the issue of blood vessels, by creating tissue that is thin enough to allow the blood to be diffused – without blood vessels.

Tissue engineers have been able to print human tissues, but until now the thickness of those tissues has been extremely limited. Tissues that are too thick cause the cells that are near the center to starve from lack of oxygen and nutrients.

One of the keys that contributed to this project’s success was the development of innovative “bio-inks.”

The team developed several new bio-inks, novel inks that have useful biological properties. These bio-inks are tissue-friendly inks that contain key ingredients of living tissues. One ink contained extracellular matrix; biological material that knits cells into tissues. A second ink contained extracellular matrix as well as living cells. The team also created a third ink in order to create blood vessels. This ink has a very important property: it melts as it cools. This allowed the scientists to print a network of filaments. When the material was chilled, the material melted, which allowed scientists to suction the liquid out and create the network of tubes: blood vessels.

While this method of bioprinting represents an important step towards the goal of developing tissues that can be used to test drugs, the institute says that this method also represents an early, yet important step towards replacements for injured or diseased tissues. Using CAT scan data and computer-aided design (CAD), replacement tissues may one day be able to be 3D printed, and used by surgeons to repair or replace damaged tissue.