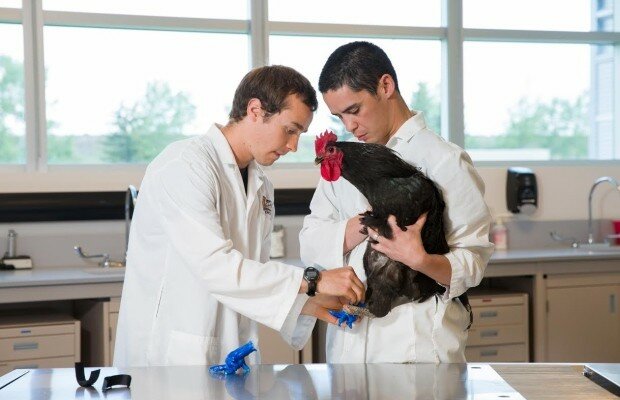 A Calgary rooster has a new set of bright blue feet thanks to 3D printing.

Foghorn the footless rooster suffered frostbite which left him with only stumps. Unable to get around, he was in dire shape when he was found by the city’s animal and bylaw services.

When Dr. Daniel Pang, an assistant professor in the University of Calgary’s Faculty of Veterinary Medicine, heard about Foghorn’s plight, he decided to help the bird.

He also knew he would need to recruit others to get Foghorn back on his feet.

“I immediately thought of Dr. Mark Ungrin as I knew he had a 3D printer in his laboratory and he might be able to design and create prosthetic feet for the rooster,” Dr. Pang said.

Dr. Ungrin and Dr. Pang then sought out the help of an undergrad biomedical engineering student who could make feet that worked.

“I printed off the stumps and printed off the new feet and painted them with silicone so they’d be sturdy but flexible and soft for the rooster,” said student Douglas Kondro about his part in the project. ​”The first ones didn’t work. He couldn’t really walk and kept falling over so I was pretty disappointed.”

After trial and error, the second set of blue bird feet allowed the rooster to walk.

Foghorn has since been adopted by a family where he is able to strut around again.

Pang said the project shows how interdisciplinary cooperation and 3D technology can come together to do good.

“Even though things started out purely by chance, this collaboration is really a very good example of how clinical sciences can tie in with basic researchers and solve a very real and very acute problem,” said Pang about the efforts to create feet for a needy bird.