Getting to test drive two personal 3D Printers is a lot of fun and I was lucky enough to be given two demo units:  the Afinia H479 and the 3D Systems 2nd Generation Cube.  I was evaluating the units in order to recommend a desktop machine to a community center that is putting in a MIT-style FabLab in Maine.  Here’s my take on both units and where each fits into a specific scenario.

The great technical support team at Engine in Biddeford, Maine had the Afinia machine prepped for me to give a workshop on, “How to get started in 3D Printing”.  The Afinia is an open source 3D Printer that retails for $1599 and I had planned to show newbies what 3D Printing was all about.  Well I did do that, but first we had to wait for the print platform to warm up.  It turns out that takes a full hour.  Since I had arrived early and had it warming up, printing was not an issue.  Until we stopped and let it cool down to remove the demo print and still had an hour left in the class.  Mmmm…waiting is not entertaining in a workshop so it’s good I had a laptop crammed with photos of 3D printed parts.

Except for the group wanting instant gratification, the Afinia performed perfectly. And there is big news on the Afinia front.  The company’s R&D team has developed software that allows you to PAUSE printing at specified heights, replace the filament, and then resume printing.  During the pause you can change material or color mid-print.  You can even insert a non-printed part then resume printing.  That’s pretty cool.  The official announcement is due out next week.  But you can see photos here of multi-color rockets produced by a local Cub Scout Pack on the unit.  All Packs should be so luck as to have leaders who work at Afinia!

I love the Cube as anyone who has read my previous blog post knows.  So I was expecting the usual Plug and Play perfection that the 1st generation Cube demonstrated.  Reality was close and again the $1299 Cube shows that the design team at 3D Systems understands mainstream markets. 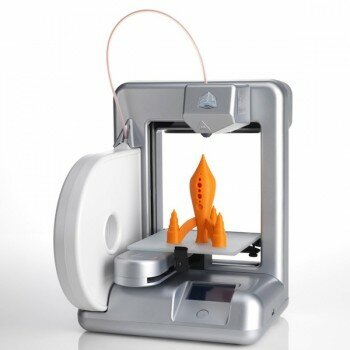 Guiding the build platform into three screws on the 1st generation Cube could be annoying, so the design engineers developed a beautiful magnet system that is supposed to make set up much easier.  But in fact the magnet does require that you pay extra attention to leveling the platform.  There is now a Leveling function in the Operator’s Touch Screen, which helps tremendously. Of course, once leveled you’re good to go and it held very well, but I did find the old screw system straightforward enough.  That said, the speed was faster than the 1st Generation machine and the glass platform is much safer in terms of heat than the previous metal one. It cleaned up nicely and heated quickly for subsequent prints.  Overall, this is an improvement over the 1st Generation machine.

It is also nice to now have the option of using PLA over ABS with the Cube.  For an earring design with thin walls the PLA performed much better than the ABS.  Design for 3D Printing needs to take into account material as well as machine parameters and I like having the choice.  Compostable PLA is also better for the environment.  I also love the Cube cartridge system for mainstream users…it’s SO easy to use.  Plus the Cubify Invent 3D Design software is 1st rate whether you are new to 3D printing or a CAD expert.

So which 3D Printer will I recommend to Engine?

Many technical reviews evaluate a machine in a vacuum but years of product design have taught me that you must take the end user into consideration.  Yes, you might be able to get cheaper filament for an open source printer, but in a community setting with multiple users from kindergarteners to senior citizens with limited technical experience, the cartridge system can’t be beat.  Warm up time is a challenge in a community setting, especially if giving presentations and workshops.  Afinia told me they have talked with their Chinese design team about the issue and did give me some tips to speed it up which helped marginally.

3D Systems as I’ve pointed out in an earlier blog post, clearly understands the needs of the mainstream market.  Getting 3D printing technology into the hands of the masses is where there will be the most impact long term.  The Director of this FabLab also blurted out a telling comment about users.  “The Afinia is not CUTE like the Cube you had here before!!”  Apple built legions of faithful fans with design that appealed to the mainstream user.  Perhaps 3D Systems is onto something.

We still have a few more workshops so I’d like to run the machines through their paces now that I have a better feel for setup.  For any new device the operator has a learning curve, no matter how long you’ve been in the industry.