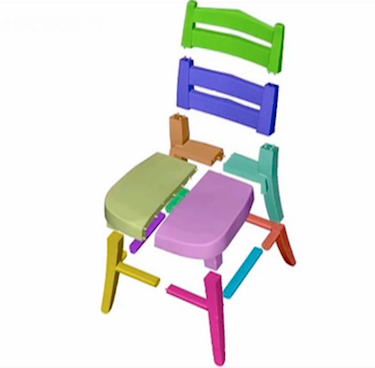 Don’t worry about sitting on it, it’s a lot sturdier than it looks. We think.

I’ll let you know now that this is one of those good news/bad news situations. Have you ever wanted to print something bigger than the envelope of your printer? Dumb question. Size is one of the greatest limiting factors in personal 3D printing since the largest among them rarely have build volumes larger than 8x8x8 inches and very few can be modified for larger prints. So the bright among us take on the tedious task of designing small parts that can be assembled into larger objects. The brilliant among us devise clever ways of cutting out the tedium, which is what Linjie Luo at Princeton University and some colleagues did.

They wrote a program called Chopper that partitions objects procedurally according to a few criteria such as “assemblability, having few components, unobtrusiveness of the seams, and structural soundness.” The seams are kept as far away from mechanical parts as possible and the user can guide the partitions as well, though it seems you’d not need to do that often, because according to the results of testing the program against human-placed partitions on several objects the program was only outdone on the oddly shaped armadillo.

As you can see, creating furniture becomes as simple as playing with oversized Legos. Around 60% of the space in my apartment is taken up with furniture, so simply speaking in terms of volume this program (and others like it) will have a major impact. Furniture won’t just be printed, it’ll be customized; benches can curve and interlock, tables can lengthen, widen, and flip into chess boards, my desk can have an enclosure for my computer and my dog, and I can print tiny chairs that will make my balcony look bigger. This all sounds great, you’re thinking. Where do I get this Chopper program so that I can print a pool table, you’re saying to yourself. I wish I could tell you, but there’s no release date. Besides, personal printers apparently didn’t manage the partitions very well, but maybe that doesn’t apply to the 100-micron and lower printers. I told you, good news/bad news.

Cameron, Senior Staff Writer, is a technology enthusiast that can better write about 3D printing than he can ride a bike. His interest in 3D printing is mostly driven by his desire to become a cyborg. He enjoys philosophical conversation and is also fond of poetry and Star Trek. Connect with him on Google+. View all posts by Cameron Naramore »
« Defense Distributed takes a 3D printed AR-15 lower receiver out for a spin
It’s gigantic! Here’s the biggest ever 3D printed adjustable wrench. »

2 Responses to “Chop your way to bigger 3D prints”


Leave a Reply to 3DEA | 3Dea’s Top Five: 3D Printing On Mars, For Meat And In Toys Cancel reply