Usually we introduce new crowdfunding campaigns for 3D printers individually, but today we’ve got a combo for you. The two units are quite different, but the overlap and potential synergies that could arise from using the two together are substantial. See, one of them prints circuit boards and the other prints with metal. Let’s examine the circuit printer first.

Though it’s not technically a 3D printer, the EX1 by Cartesian Co brings a spark to democratized manufacturing. It’s still powered by the same hardware as RepRaps (the prototype was a modified MakerBot Cupcake). Rapid prototyping through 3D printing has propelled many products to market and startups to profits, and that’s all been with static and/or mechanical objects. Imagine that same revolution with custom electronics created in a similar fashion. That’s the reality that the EX1 brings to the table. Silver Nitrate and Ascorbic Acid are loaded into separate off-the-shelf inkjet cartridges; when they’re mixed at the deposition point a conductive path of silver nano particles is adhered to the surface of the board, though that surface doesn’t have to be a board. It can be a range of materials; they’ve had success with paper, wood, kapton, and even fabrics! 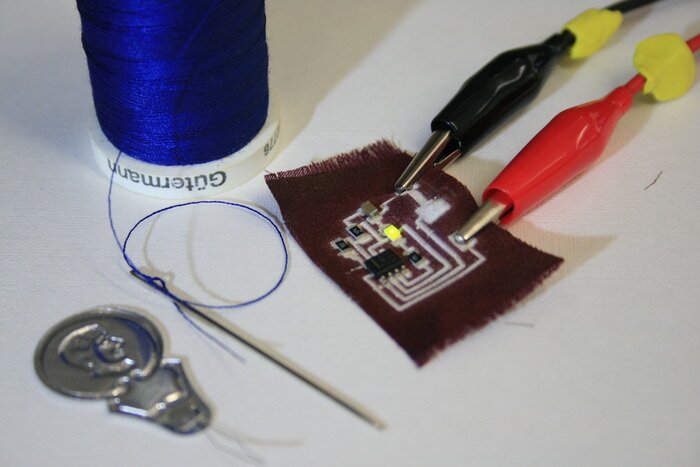 The team combines the use of conductive glue with their printed boards and presents a solderless form of creating custom electronics. Personal electronics. Wearable electronics. DIY electronics for every yourself. It’s as simple as drawing the 2D pattern, printing, and gluing on the microchips and resistors and all of those other little just as important bits that go on circuit boards. The ability to print these circuit boards at the press of a button is going for $1499 (plus $500 for assembled) on Kickstarter.

But the EX1 isn’t the only printer on the block printing in conductive materials. No, the Mini Metal Maker on Indiegogo does just what its name implies; it makes objects in metal, and, for those that haven’t had their coffee yet, metal is conductive.

Metal clay!? I had no idea. Of course, several 3D printers can handle clay and clay-like substrates so this is hardly a breakthrough. It’s just a brilliant application. After prints air-dry they go into a kiln at 900C and the binder of the clay burns away to leave only fused metal. Options of metal include Copper, Bronze, Steel, Silver, and Gold, and there are plans to add another extruder for printing with two materials. Because the extruder is syringe-style, any clay-like materials are compatible. So ceramic could be used for insulation alongside silver that will be carrying a current.

This printer is going to empower jewelry makers and inventors in a big way. If you were waiting to get a 3D printer once they could do metal, now’s that time. A kit could be yours for $750, or an assembled Mini Metal Maker for $1000. What a deal!