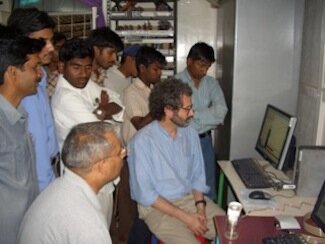 3D printing seems to be inextricably linked to discussions of the next Industrial Revolution. The media has latched onto the “miracle of 3D printing” – as proclaimed in an NPR program – and credited the technology with creating a revolution in manufacturing. If one would believe the press, 3D printing could save the American or even global economies.

In visiting Dr. Neil Gershenfeld, Director of MIT’s Center for Bits and Atoms in Cambridge, MA, I was able to glimpse his view of this situation. Dr. Gershenfeld is the creator of the worldwide FabLab concept and has worked in the field of digital fabrication for many years. It was a National Science Foundation grant in 2001 that funded CBA research on the boundary of computer science and physical science. Dr. Gershenfeld likes to whimsically call it the study of Bits to Its.

Dr. Gershenfeld recalls, “I first fully appreciated the parallel between personal computing and personal fabrication when I taught my first How to Make [almost] Anything class. We were amazed by how many students from so many majors wanted to take the class – just because they wanted to make things. Things that were important to them, personal things.” That included an alarm clock a sleepy student had to wrestle to turn off and a dress whose spikes had sensors to detect when others were getting just a little too close for comfort.

The first class’s clever inventions demonstrated that the “killer app” for digital fabrication was really only about personalization. Just as personal computing allowed each person to write letters [email] or take and organize photos of family trips, personal fabrication allowed each person to make something that was customized to their exact needs.

Again with funding from the National Science Foundation, in 2003 Dr. Gershenfeld and the CBA started an outreach program into the community. A group of tools such as laser cutters, milling machines, and yes, 3D printers were connected with custom software for digital control of the tools. And so the FabLab, standing for Fabrication Laboratory or as some prefer to call it, Fabulous Laboratory, was born.

The key element of a FabLab is digital fabrication, turning the bits from a computer CAD program into its or things. There are many different types of tools in a FabLab, not just a 3D printer! Reacting to the revolution hype we’re now hearing, Dr. Gershenfeld in a recent Foreign Affairs article stated, “This is, however, a curious sort of revolution proclaimed more by its observers than its practitioners.”

The research staff and graduate students in the MIT FabLab research center have access to a dizzying array of tools including excimer laser micromachining workstations, mechanical drilling and milling, among other things. Dr. Gershenfeld estimates that their two professional grade and one tabletop 3D printer might be used for about 25% of the jobs. “Other computer controlled tools are often a better choice for a job because they are faster, cheaper or have higher resolution.” As he likes to say “Microwave ovens are convenient for some things, but they still haven’t replaced the rest of the kitchen.”

But Dr. Gershenfeld believes the real power of the coming revolution will be greater than the technical advances, it will be social. “In the FabLab we create an environment where everyone can feel safe to put forth new ideas and create new things.” As he hypothesized in the Foreign Affairs article, “By bringing welcoming environments to innovators wherever they are, this digital revolution will make it possible to harness a larger fraction of the planet’s brainpower.” Now that’s a revolution!