We’ve covered micro-3D printing and bionic bioprinting, but how the two will enable each other is where the real breakthroughs are needed. To affect electrochemical reactions in the human body, one technique is to introduce controllable conductive materials and send electric currents when and where necessary. But they need to be very small too, else they’ll interfere with unrelated natural processes. So researchers in Japan went that route, conductive and tiny 3D printing. Really tiny. 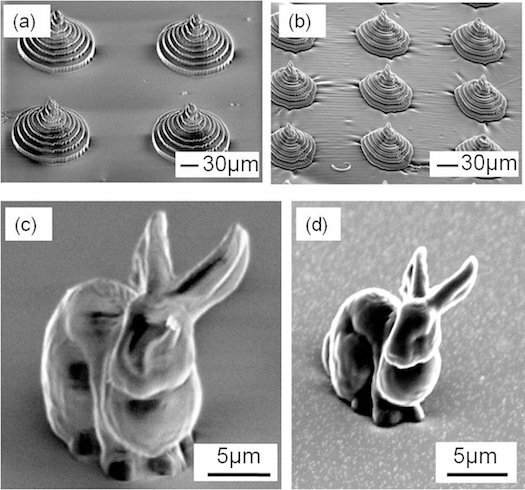 Physicists and chemists from Yokohama National University, Tokyo Institute of Technology, and C-MET took on the task of creating detailed 3D objects with conductivity, and they tried a couple methods. A UV light method was attempted, but a laser beat it out due to its precision with the photopolymer. The team learned that by baking the models at high heat, the surfaces would turn to carbon, which is conductive. Unfortunately the baking would distort the objects into unrecognizable blobs. To prevent the distortion, a material called resorcinol diglycidyl ether was added to the resin. So what starts as a photopolymer can be hardened into shape layer by layer with a laser, and then baked into a carbonized object with virtually no distortion.

The abstract of the study published in Optical Materials Express states: “Potential applications of the new photopolymers include 3-D carbon electrodes for fuel cells or batteries and interfaces for biosensors.” That sentence holds much potential. Everything from renewable energy, microcircuits, telecom, medicinal implants that treat physical and mental illnesses, and bionic upgrades could be enhanced through this technology. The ability to produce electronics is the Holy Grail of 3D printing, and this breakthrough is a big step toward making that a reality.