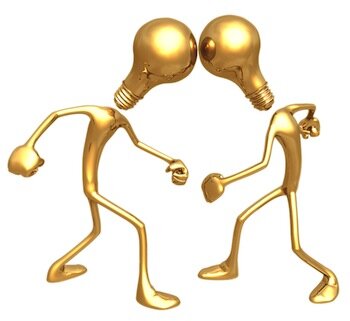 For the next couple of posts, I’d like to introduce a storyline both to increase the relevance of my introductions to IP rights to 3D printing and hopefully make things more interesting for you.

Polly Printerhead, a vivacious 20-something year-old who works as a graphic artist, has created a bunch of interesting 3D objects with her college friend and fellow graphics artist Sam Stereolithographer.  The two started printing their designs on their 3D printers first for themselves but after receiving numerous requests from friends and colleagues for their creations, Polly and Sam decided to make their objects commercially available.

One day, Polly had an idea for a line of fashion accessories. After she and Sam sketched a few designs over a couple of flat whites, they began their computer design work in earnest. Pretty soon had a line of accessories–all made on 3D printers–available for sale.

Separately, Donnie Designer, a producer of expensive accessories, got a call from his advisor, Manny Lawsuits.

Manny’s voice was filled with a mix of fear and anxiety, as he had just heard about 3D printing and according to Manny, the commercial world, as he and Donnie knew it, was about to end

Manny, being the Luddite that he is, feared technology and change in general and instead of embracing the new possibilities 3D printing technology could provide his friend Donnie, Manny decided he would make Donnie fear 3D printing as much as he did–and for the most part he succeeded; at least for now.

The conversation between Manny and Donnie went something like this:

Manny: Donnie, people know your accessories, your name, your brand–you need to protect your intellectual assets. Use IP Law to deter people from making infringing copies and penalize those who do!

Donnie: Why do I want to do that?

What if someone makes bad quality copies of your accessories?  Others will see the bad quality fakes and mistake them for yours. Pretty soon, people will be thinking that Donnie Designer produces bad stuff and won’t buy or pay as much for your products as they used to.

3D printing will enable unauthorized copying like never before, this will endanger your revenue streams preventing you from recouping your investments in design, development, creation, production, marketing and retailing – not to mention eat into your profit.

Heaven forbid if a poor quality counterfeit of one of your designs injures someone.   Donnie Designer may not be blamed but I am sure such an incident would harm your brand’s reputation.

By the way, I came across this site yesterday, put out by a Sam Stereolithographer and a Polly Printerhead.  They’re selling products they produce on 3D printers, and the accessories they’re selling look a lot like yours.  Look at this earring–they copied your idea of putting a green triangle on a circular red backgroun –your copyright in this idea is GONE! So Donnie, what are you going to do about it?

My lawyer pal told me that copyright comes into play when something is copied; well Polly and Sam are copying you, they have stolen your copyright–they are ripping you off and I think you ought to take legal action against them.

Is Manny right? To start, perhaps it’s worth asking how, in general, could someone copy something with a 3D printer?

(With regards to software for 3D printers, one could duplicate the original application (as one would do in creating a backup copy), one could copy the original and add a few modifications for example to try to hide the fact your software is not original, or take the original software and add something new (for example, adding Thai language support for a program designed for English speaking users (i.e. ‘localizing’ the product))).

Let’s say that one of Polly and Sam’s creations looks exactly like one of Donnie Designer’s accessories, did Sam and Polly violate Donnie’s copyright rights?

This goes to the core of copyright: originality. For something to be “original” in the copyright sense it cannot have been copied from something else. In many cases there is no aesthetic requirement, no intellectual requirement. If you look, for example at the UK’s relevant law, it provides protection for “a graphic work, photograph, sculpture or collage, irrespective of artistic quality” and tables and compilations (of other materials) are counted as ‘literary works’.

So, if Polly and Sam created their pieces independent of Donnie. that is, they didn’t copy from Donnie or anyone else, there is no copyright violation.

Finally, as for someone ‘stealing’ Donnie’s copyright, at the risk of being pedantic, if you look at the legal definition of theft (According to the UK’s Theft Act 1968: “a  person is guilty of theft if he dishonestly appropriates property belonging to another with the intention of permanently depriving the other of it; and “thief” and “steal” shall be construed accordingly”) a copyright thief would need to permanently deprive Donnie of his copyright in order to have committed “theft.”  If someone copies one of Donnie’s works, Donnie still retains his copyright not only because he still can do what he wants to do with his copyrighted works, but also because you can only (for example in Hong Kong) transfer copyright by a license or assignment.

The above is not meant to constitute legal advice. Should you have a legal matter, you should consult a qualified legal professional in your jurisdiction.

Ronald Yu is director and general counsel for Gilkron Limited. A US Patent Agent, he lectures at the University of Hong Kong on patent law and intellectual property (IP) and information technology (IT) and has written extensively on IP, IT and constitutional law as well as digital forensics. He is a contributor to the upcoming 3rd edition of the book Electronic Evidence by Stephen Mason. View all posts by Ronald Yu »
« 3D printing will help build unimaginable shapes
Taking apart a Makerbot Replicator, to see what’s inside »