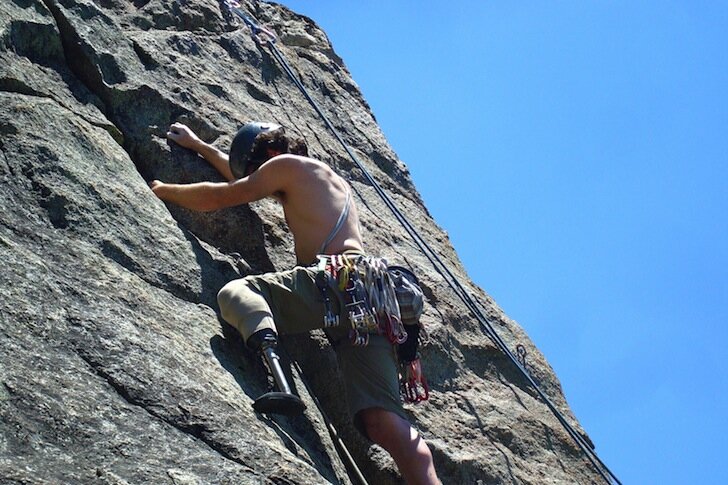 If you’ve ever rock climbed (I haven’t), then you’ll know (better than me) that the task takes a certain amount of balance, dexterity, and also rather special shoes that are flexible and extra grippy. Avid rock climber CJ Howard doesn’t have a left foot though, not a biologic one anyway. He did, but was diagnosed with osteosarcoma and had to have his left leg amputated below the knee. Quite the athlete, once a distance runner for the University of California, Irvine cross-country team, he continues to break records. 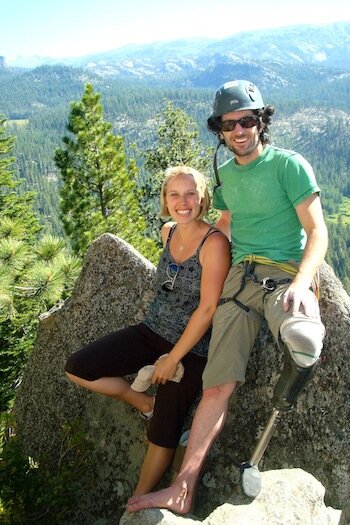 When fit with a standard prosthetic, CJ was dissatisfied with how poorly his climbing shoe fit. Fortunately for him, one of his climbing partners is Mandy Ott, who happens to be an environmental/aerospace engineer, and a good friend. Ott pulled out her laptop and modeled a new prosthesis based off of a dropped-toe banana-like shape that CJ felt would be effective at climbing. She then sent a CAD file of the model to Ohio-based Morris Technologies, as she had encountered direct metal laser sintering (DMLS) additive manufacturing in her aerospace work, and they’re the largest distributor of DMLS. Such systems create objects by laser etching cross sections onto a bed of metal powder(s), fusing one layer at a time until a whole structure forms from the bottom up. Ott chose to have the prosthesis created this way because she wanted one smooth piece, with no protruding nuts and bolts that most prosthetics have, which could get hung on rocks. The system that produced the modern appendage was developed by EOS GmbH, a prominent player in DMLS technology. Taking only around 40-hours to print the titanium (Ti64) foot, Ott was able to give it to CJ for Christmas.

CJ has since put plenty of vertical miles on the 5-pound foot, which is hollow for reduced weight and covered with rubber (by another company) intended for climbing shoes. Having climbed all over Northern California, from the Phantom Spires to the cracks of Yosemite, he’s come up with a couple other designs he’d like to try out. The human foot being dynamic, through a combination of muscles, tendons, and bones, can contour and spread or concentrate pressure as necessary for whatever terrain. Since CJ’s prosthetic is not dynamic, he could benefit from having several interchangeable feet designed for specific types of climbing; he feels a triangle shape would be ideal for cracks, and one with less downturn for slabby conditions. In 2012, it’s good to know that 3D printing will provide whatever feet CJ desires.