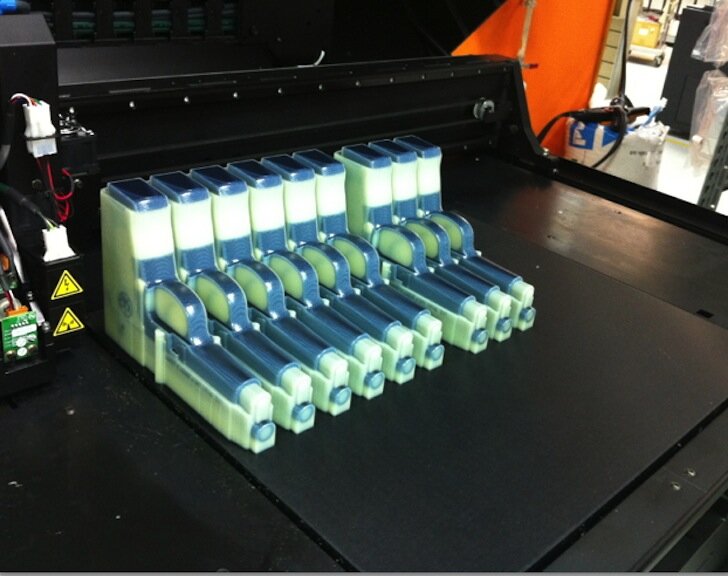 A tray of pistol prototypes, printed on an Objet printer, shown on the Objet blog. Objet has merged with Stratasys. Slightly ironic?

It’s not easy to want to 3D print a gun. I didn’t say to 3D print a gun, I said to want to 3D print one. Nope, someone wanted to do just that, but before any gun was ever printed, he had his leased 3D printer seized. If this were the government doing the seizing, I’d be very scared of my increasingly deteriorating rights, indeed, as this would amount to the police stopping me before I’d committed a possible crime. But in this case, it was the 3D printer manufacturer who took the printer away, based upon the intended use that the 3D printer company says was not consistent with their terms of service.

Defense Distributed and it’s spokesman Corey Wilson, has had a difficult time with his Wiki Weapon Project, whose idea was to start a competition to create the first 3D-printable gun capable of actually firing a bullet, and eventually of providing a platform for anyone to share 3D weapons schematics online. First, Indiegogo pulled his crowdsourcing project, already approved and running, after, I assume, they received complaints from anti-gun activists. I can safely assume that since they had no problem approving the project in the first place. But then the project got a shot in the arm when private donations poured in from gun rights supporters and funded his project outside of Indiegogo to the tune of $20,000. This was a couple weeks ago.

After banking the twenty grand, Wilson went out and leased a Stratasys uPrint SE 3D printer and was on his way to making and testing a gun in the coming weeks. But soon after receiving the printer, Stratasys began to question his use of their product. After a final letter from the Stratasys legal department, the text of which is shown below and also posted on Wilson’s Tumbler blog, a team from Stratasys, came to his door and seized the 3D printer. He hadn’t even gotten it out of the box yet.

I am in receipt of your email dated September 26, 2012 in which you state your opinion that your intended use of the Stratasys uPrint SE will not be in violation of federal firearms laws. You have also made it clear that you do not have a federal firearms manufacturers license. Based upon your lack of a license and your public statements regarding your intentions in using our printer, Stratasys disagrees with your opinion. However, we do not intend to engage in a legal debate with you.

It is the policy of Stratasys not to knowingly allow its printers to be used for illegal purposes. Therefore, please be advised that your lease of the Stratasys uPrint SE is cancelled at this time and Stratasys is making arrangements to pick up the printer. Please notify me when, in the next 48 hours, we can pick up the printer.

Corporate lawyers do what lawyers do, and one of their tasks is to remove all risk from the business they represent. You can’t blame them for that. And the public relations aspect of the first 3D printed gun being created on a Stratasys 3D printer was probably not overly appealing to the company.

I’m sure this action would hold up in court, and I can understand Stratasys taking back the printer for a variety of reasons, but this whole saga from the Indiegogo project take-down, to where we are now, just leaves me with a sick feeling in the pit of my stomach.

Wilson emphasizes that everything his group is doing is legal, since the manufacturing of weapons is not prohibited as long as they are not for sale or trade. Anything more than a personal weapon requires a special license, which he does not have. But which he does not need either, since he had no intention of selling or trading any printed gun, and his ultimate goal is to simply provide an online repository of CAD files for user-designed weapons.

The next step for Cody Wilson will undoubtably be to get his hands on a home-built 3D printer, which will have no use restrictions. But I do worry that Cody himself may be seized one of these days — after all, under the National Defense Authorization Act (NDAA) for Fiscal Year 2012, the current administration has signed into law their right to detain American citizens and hold them indefinitely with no due process if they suspect them to be a terrorism threat. You don’t think this can happen? Then ask Brandon J. Raub, who didn’t say worse than most radicals of the Occupy movement do.

Lest you think that I want the people of the world printing their own guns in their homes, that’s not where I’m on on this issue. At this point, I’m just distressed by the outcry against Cody Williams, who hasn’t even printed a gun yet.

If you haven’t seen the original Indiegogo video yet, here you go:

Mark is the founder of 3DPrinter.net. He encourages anyone reading this to submit their own article for publication. Connect with him on his Google+ account. View all posts by Mark Fleming »
« Popular Mechanics bestows 2012 tech awards on two 3D printing companies
Disney’s “Printed Optics” – 3D printing optical elements for interactive displays, sensors, and illumination. »