A new study by researchers in the Built Environment Research Group at the Illinois Institute of Technology measured the aerosol emissions of commercially available desktop 3D printers, to see if the 3D printing process posed any risk to operators in the same room. The emission of ultrafine particles (UFP) are nanosized particles that can deposit in the lung and even migrate to the brain, causing serious health issues.

Heated thermoplastic extrusion and deposition is a process that has been shown to have significant aerosol emissions in industrial environments, so it would follow that FDM-type or filament-fedd 3D printers that extrude thermoplastic might have the same emissions problem. The researchers took measurements of size-resolved and total UFPs while operating desktop 3D printers both with ABS and PLA plastic filament in an enclosed office space. No word 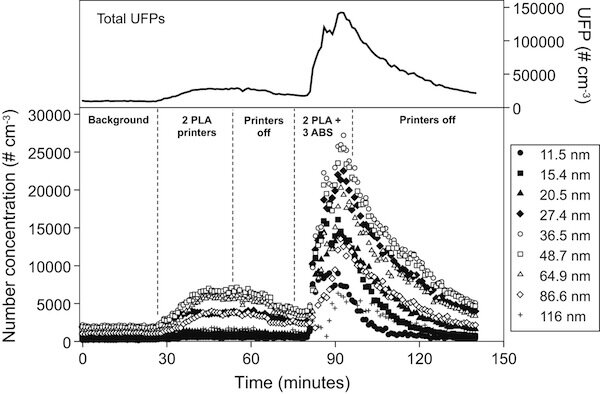 For all the scientific details go to the Abstract. But here is their conclusion:

In this work, we present some of the first known measurements of which we are aware of UFP emissions from commercially available desktop 3D printers. Emission rates of total UFPs were approximately an order of magnitude higher for 3D printers utilizing an ABS thermoplastic feedstock relative to a PLA feedstock: ∼1.9×1011 #/min compared to ∼2.0×1010 #/min. However, both can be characterized as “high emitters” of total UFPs. These results suggests caution should be used when operating some commercially available 3D printers in unvented or inadequately filtered indoor environments. Additionally, more controlled experiments should be conducted to more fundamentally evaluate aerosol emissions from a wider arrange of desktop 3D printers and feedstocks.

Before you get into a panic about 3D printing in your home, you should also note this part of the report which, did not make it into the conclusion:

So, 3D printing can be dangerous to your health, but only about as much as frying up some bacon or barbecuing a burger might be. Get ready for more research, new regulations, class action lawsuits, and of course New York’s self-appointed health czar Michael Bloomberg to start telling you what type of mask you must wear, or enclosure you must buy for your printer.

I’m being a bit flippant, of course, as over the years I’ve become cynical of all the scaremongering over seemingly every possible thing that can kill us, most of which turn out to be overreactions or more deviously, research departments looking for funding, politicians looking for power or lawyers looking for money. So, in all seriousness, if it does turn out to be a problem, I’m sure we’ll start seeing 3D printer enclosures such as the one in the video below, or the printers themselves being redesigned to keep the emissions in check with their own air filtration system. Either way, these will add to costs.