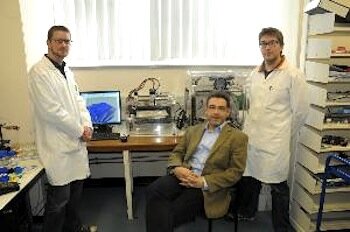 Professor Cronin and team with their 3D printing drug machine

3D printing sites, medical sites and even many general audience sites have been abuzz this week over an article released from the University of Glasgow entitled, DIY drugstores in development at the University of Glasgow. Now that’s an article title that’s guaranteed to get attention! This subject went a bit viral with some pretty creative titles on some of the articles, ones that I’m sure would have certainly gotten Timothy Leary’s attention if he were alive today.

This new 3D printing process is being developed by Professor Lee Cronin, Gardiner Chair of Chemistry at the University of Glasglow. He says that the research he and his team are doing could eventually lead to “home chemical fabricators” with which anyone could design and create medicine in their homes. He wrote up the process in a research paper titled ‘Integrated 3D-printed reactionware for chemical synthesis and analysis,’ published in the journal, Nature Chemistry.

Cronin took a commercially-available, fab@home 3D printer and open source CAD software and used it to build what he calls “reactionware,” which are special vessels in which chemical reactions take place. These vessels are made from a polymer gel which sets at room temperature. By introducing other chemicals to the gel, by way of a basic 3D printer, the vessel itself becomes part of the reaction process, and a new chemical is created.

This technology is apparently already common in large-scale chemical engineering environments, but it is very expensive and time-consuming. Cronin’s development of reactionware makes it affordable for the first time at laboratory scale.

Below is a gallery of images from the Nature article that shows the fabricator, the print head and an illustration of the reaction chamber.

Here’s Cronin on the importance of his research:

“It’s long been possible to have lab materials custom-made to include windows or electrodes, for example, but it’s been expensive and time-consuming. We can fabricate these reactionware vessels using a 3D printer in a relatively short time. Even the most complicated vessels we’ve built have only taken a few hours.

“By making the vessel itself part of the reaction process, the distinction between the reactor and the reaction becomes very hazy. It’s a new way for chemists to think, and it gives us very specific control over reactions because we can continually refine the design of our vessels as required.

“For example, our initial reactionware designs allowed us to synthesize three previously unreported compounds and dictate the outcome of a fourth reaction solely by altering the chemical composition of the reactor.

“3D printers are becoming increasingly common and affordable. It’s entirely possible that, in the future, we could see chemical engineering technology which is prohibitively expensive today filter down to laboratories and small commercial enterprises.

“Even more importantly, we could use 3D printers to revolutionise access to healthcare in the developing world, allowing diagnosis and treatment to happen in a much more efficient and economical way than is possible now.

“We could even see 3D printers reach into homes and become fabricators of domestic items, including medications. Perhaps with the introduction of carefully-controlled software ‘apps’, similar to the ones available from Apple, we could see consumers have access to a personal drug designer they could use at home to create the medication they need.”

Of course, before this technology reaches the consumers’ hands, it will make its way into the labs of pharmaceutical companies, where hopefully, reactionware will be used to create drugs faster and in a more customized fashion, and in locations around the world where it can be put to use to help those who don’t have availability to medicine as we do in western countries. But as it is with the rest of the 3D printing phenomenon now, hobbyists and home scientists won’t be far behind. And that’s where the real fun starts.

If we want to get any of this good DIY medicine going here in the U.S., we’d first have to kill off the Federal Drug Administration. They are not particularly fond of innovation, or of allowing consumers to have choices. But, the democratization of manufacturing through 3D printing is changing everything, bringing true meaning to the saying, “Power to the People;” it’s not too far afield to predict that the home manufacturing revolution will include drug making as well, FDA be damned. Think about it: you could 3D print a new washing machine part, and then print the pain reliever you’ll need after you throw out your back installing it.

So, readers, I’m interested to know what you think of giving consumers the ability to print their own drugs at home? Let us know in your comments below.

Mark is the founder of 3DPrinter.net. He encourages anyone reading this to submit their own article for publication so he can quit writing so much. Connect with him on his Google+ account. View all posts by mark »

If you know your way around 3D printers or 3D modeling, whether you are a user, engineer, salesperson, vendor or blogger, we'd love to have you write an article for us. We are getting about 3,000 readers a day and growing quickly. Interested? Click here..

We are about to witness the most innovative decade in history, says a columnist in Forbes. And 3D pr[...]

Makerbot cut the delivery time for a Replicator 3D printer from 12 weeks to 30 days or less. In fac[...]

What if you could 3D print new organs, rather than waiting for a transplant? It's being done now by [...]

3D printing service Shapeways has announced a $6.2 million funding round, plus that they have 3D pri[...]

Here are nine ways that I see the new technology of 3D printing will disrupt the future. All for the[...]

Andrew Leinonen has created a step-by-step Instructable on how he has used a 3D printer to create a [...]

i.materialise has introduced the ability to 3D print models in bronze. Take a look at the beautiful[...]