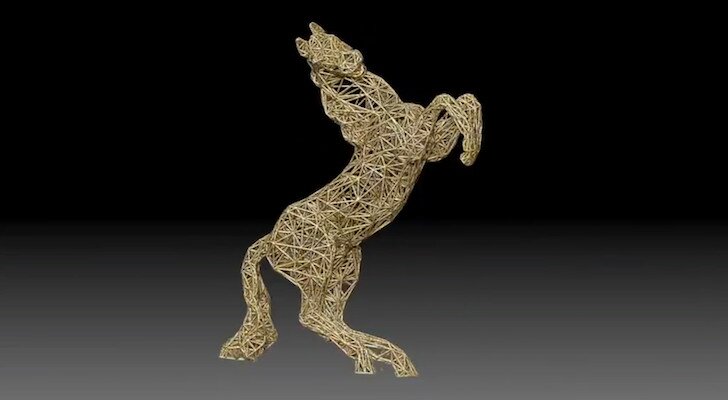 Those that follow either Thingiverse or 3D art will likely be familiar with Dizingof. Asher Nahmius is a Thingiverse Superstar famous for beautifully confusing 3D math art, but in an odd case of copyright infringement he removed all of his files from the site. Nahmius felt his intellectual property was used in a manner by Stratasys and 3D Systems that violated its Creative Commons – Attribution – Noncommercial License. Models that Nahmius uploaded to Thingiverse under that license were printed on a Stratasys printer and displayed at a Stratasys booth without attribution, and a similar incident occurred involving 3D Systems. This post isn’t primarily about that though; it’s to show off a recent development of his.

The “tetrahedral modeling” does two things: “Converting a 3d model to a Volume-Triangles mesh – It retains the model’s outer surface intact and builds inside support structures – for FAST rapid prototyping (cut-short 3d printing time & material cost) OR with some Organic techniques create a Neuron Network mesh for aesthetic looking designs.” This is essentially a new type of infill. Typical infills consist of repetitive layers with varying-sized gaps in the design — 10% infill will have larger gaps in the design than 20% infill, creating a more hollow object that uses less material and prints faster. Nahmius has developed a technique that procedurally generates a support structure, based on 3D geometry, that uses less material than conventional infill methods.

I’m curious as to how Nahmius will release his technique, if at all. It’d be a great add-on to something like MeshLab. Such a program would save operators of 3D printers loads of material and time, two of the greatest costs in 3D printing (and still lower than conventional manufacturing). If he doesn’t release it, hopefully someone in the RepRap community will design their own procedural technique and get it into Slic3r.