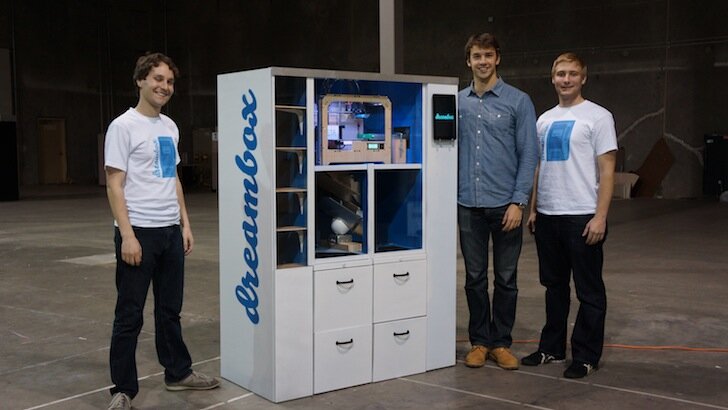 A Dreambox, with founders David Pastewka, Richard Berwick and Will Drevno.

It will be some time before we have vending machines where we can swipe our credit card, and have most anything we want 3D printed instantly, on the spot. No doubt it’s coming, but not yet. However, first steps in that direction are being taken. Three U.C. Berkeley students have just developed what can truly be called a 3D printing vending machine. It won’t work as fast as a Star Trek Replicator, but it’s a much faster process than ordering from an online service and waiting for delivery.

It’s called the Dreambox, not to be confused with the Dream Vendor “vending machine” at Virginia Tech, which we reported on last year. While both machines house 3D printers in a secure enclosure and allow people to upload a CAD file to be 3D printed, the Dreambox takes the concept beyond the Virginia Tech machine.

If you’ve used Redbox, you know how you can order up a movie from your computer or mobile device, and then pick it up at your local Redbox unit. Dreambox is something akin to that model. With Dreambox, you go online to upload your file (or choose from thousands of ready-to-go models) and order your print. The system’s server then queues your print on the Dreambox unit closest to you. When the job is done, you’ll receive a text telling you to go pick up your model, which is stored securely in one of the unit’s locked drawers and is opened with the unlock code included in the text.

The Dreambox development team met in 2011 at U.C. Berkeley in a mobile application development class. They didn’t begin with this product in mind. There were working together on other startup ideas for a year, and found that they struggled with the time it took for them to receive parts from 3D printing services, often 2-4 weeks. There had to be a better way, they thought, and the idea of hyperlocal, accessible, affordable and convenient 3D printing vending machines was born.

An incubator-accelerator program, Skydeck Berkeley, accepted the Dreambox team last fall and since then the team has been designing and prototyping their first vending machine, for the U.C. Berkeley campus.

Dreamboxes are built to order with one or more internal 3D printers and lockers based on customer needs. They don’t build their own 3D printers, but instead leverage existing 3D printing technology.

It’s a brilliant idea. I know that here in my town, an architectural student at Cal Poly was just last week telling me how the students don’t have anywhere they can easily, quickly and affordably get things 3D printed. It sounds like something every campus could use, doesn’t it? And beyond campuses, maybe sitting right there next to Redbox in my local grocery store.