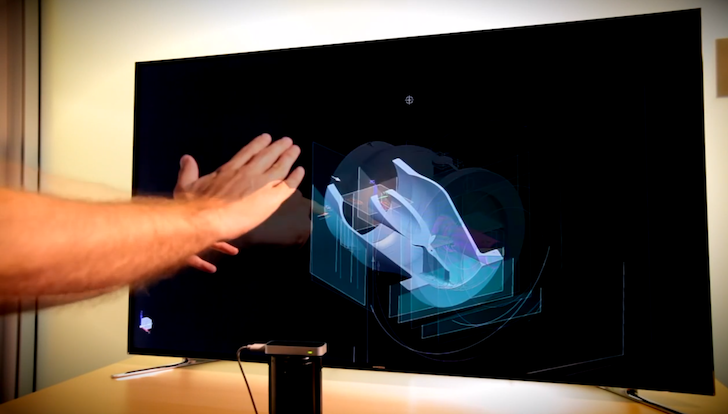 Elon Musk is one of the hottest names in new technology right now. Currently a rockstar for his ultra-successul and super cool Tesla electric car company, he’s also less widely known for his SpaceX rocket-building venture and co-founding Paypal. A couple weeks ago he made mainstream news again with his Hyperloop transportation concept as an alternative to the worst idea of the century, the boondoggle that is called the California High Speed Rail.

Yesterday he came out with something entirely different, and it involves 3D modeling and 3D printing. In a video on his SpaceX Youtube channel, he shows off his design lab, in which engineers can manipulate 3D designs through hand gestures. He argues that using a mouse on a two dimensional surface is so yesterday, and is just not a natural way to design. A more natural way to interact with models is by gesturing with your hands in some of the same motions as you would if you were able to physically manipulate a real object.

He hasn’t invented any new hardware for this, opting for the impressive Leap Motion controller that tracks the motion of your hands and all ten fingers up to 1/100th of a millimeter. But he has written some of his own code that integrates the controller with their Siemens NX PLM software.

From there he added 3D projection and also the virtual-reality headset Oculus Rift. It’s not a new product, but it’s quite a powerful demonstration of a new way of working with 3D design software. Those familiar with gesture-controlled interfaces have seen demonstrations like this before. But, hey, it’s Elon Musk, so it’s newsworthy.

Musk wasn’t satisfied just showing off his seemingly magical gestures. To complete his demonstration, he sent the design of the rocket engine he’d been moving around the screen to an EOS metal 3D printer.

I’m sure that even with all th publicity that 3D printing has received in the last couple years, this video will still reach some people who will say, “Wow, what’s a 3D printer?”

Even though nothing was introduced that’s new, it’s great to have one of the today’s tech superstars not only talking about, but using 3D printing in such a public way.