Charles Darwin wrote, in his groundbreaking book, “On the Origin of Species:”

“There is grandeur in this view of life, with its several powers, having been originally breathed into a few forms or into one; and that, whilst this planet has gone cycling on according to the fixed law of gravity, from so simple a beginning endless forms most beautiful and most wonderful have been, and are being, evolved.”

– Charles Darwin, “On the Origin of Species”

Any parent can tell you that they can see traits of both the mother and father in their children. While they don’t look identical to the parents, some characteristics are obvious. But each child, while they may exhibit some similarity to each other and to their parents, is very much different from the others, as the parents’ genomes are combined or mutated at each conception. 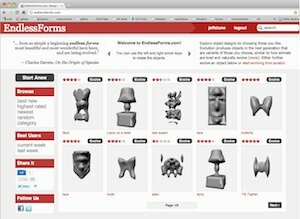 Inorganic objects, such as rocks, do not breed and and evolve. But incredible new software and hardware let us perform otherwise unnatural acts, so why not use these tools to see what would happen if we were to breed and evolve these non-living objects? Why not use 3D modeling, some sophisticated programming, and 3D printers to create the offspring of inorganic “parents, just as nature does with biological systems?

It’s a wild idea, and one that the Creative Machines Laboratory at Cornell University decided to tackle with their website, EndlessForms.com. The easy-to-use website allows people of any technical ability (actually, it’s takes zero technical ability) to evolve objects into new generations of offspring, and then, if desired, order a 3D print of any object.

You begin at EndlessForms.com by taking a look at some popular recent offspring others have created. They are shown on the home page, spinning on their vertical axes, in a rather surreal display. You can choose any two or more (polygamy is legal at Endless Forms) to serve as parents and then instantly breed them and show what their offspring would look like. From there, you can save any of your creations that you like into the population.

Alternatively, rather than beginning with offspring that others before you have created, you can also begin with any of the base set of objects the site originally began with — the Adams and Eves, so to speak.

If you decide to print an object you or someone else has evolved, you can simply click a button to print a copy very inexpensively at Shapeways.com. The two have partnered up so ordering is seamless, and you’ll be able to choose from silver, steel, gold, bronze, ceramics, plastics, sandstone, and many other materials. Perhaps you’d like to use the piece as a item of jewelry, a keychain or a statuette in your home.

You might be saying to yourself, wow, this is really cool, but for what purpose is the site made? Good question. The team developed the site for two reasons: a scientific purpose and a practical purpose.

The scientific purpose of the site is actually much more than you’d expect. It is to “explore what complex morphologies can be created with a computational implementation of developmental biology, which is a step toward creating robots whose bodies and brains rival the complexity, intelligence, and agility of natural organisms. Looks like we have a lot more to look forward to.

The practical purpose is to teach the important evolutionary concept that complex things can arise from a series of small changes. Only 39% of Americans believe in evolution, so this site helps people to see the power of evolution in action while having a bit of fun.

Websites like Shapeways.com and i.Materialize.com let the average person create objects from their 3D models. But when I say “the average person I mean the average person with some degree of experience with 3D modeling programs. While they don’t have to be masters at Autodesk or Solidworks, perhaps using much simpler programs like Google SketchUp, they still must have some technical design ability, along with some creativity and inspiration.

The beauty of a site like EndlessForms.com is that anyone, even a child, can create some custom 3D objects with zero design work, and within minutes have an order placed at Shapeways.com for a 3D print of it. This alone will bring more understanding of the 3D printer world to people, and I’m sure spur some into learning more about 3D modeling and 3D printing. And classrooms are starting to use EndlessForms.com to help teach students about evolution, in a hands-on way teachers have not been able to do before. I’m hopeful that this will spur interest in some of these kids to eventually follow a path into design or engineering in college.

In a few short years, the current state of EndlessForms.com will look like amateurs at play. But by then the site will have evolved into something so unreal, into something that you and I can only barely imagine today. And, of course, we look forward to seeing the “offspring of the site, which will have mutated in ways we don’t yet even see coming.