Right now there are two main 3D printer companies in which you can invest — Stratasys (SSYS) and 3D Systems (DDD). Each of these have roughly a three and a half billion dollar market capitalization. While there are two other much smaller, niche players you can read about in my Investing in 3D printing stocks in 2013 article I wrote last week, there are just not many investments to choose from in the additive manufacturing world. But considering this is such a hot technology now, covered in literally all major media, and SSYS and DDD have skyrocketed over the last couple years, that is undoubtedly going to change.

In fact, another 3D printer manufacturer has just filed to raise $75 million in an Initial Public Offering, planning to list on the NASDAQ under the ticker of XONE. ExOne builds 3D printers for industrial and commercial customers that specialize in printing in sand, ceramics and metals such as titanium, tungsten carbide, aluminum and magnesium. And they offer two of the world’s largest printers, offering build sizes as large as 1800 x 1000 x 700 mm (70 x 39 x 27 in.) for sand and 780 x 400 x 400 mm (30.7 x 15.75 x 15.75 in.) for metal. Smaller scale metal/glass printers are also available for university/research lab applications or small-scale product manufacturers, with a build size of 40 x 60 x 35 mm (1.5 x 2.3 x 1.3 in.). 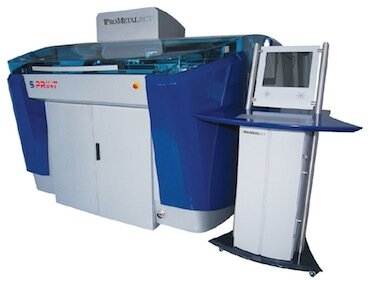 How does ExOne compare in size with Stratasys and 3D Systems? It doesn’t. The company revenue for the first nine months of 2012 was only $15.9 million, which is up year-over-year from $12.6 million. And it’s still bleeding money, with a 2011 loss of $5.3 million that grew to a loss of $11 million in 2012. Comparing again, Stratasys and 3D Systems are both highly profitable. But ExOne does has some big customers, from Caterpillar to Ford to Boeing.

If the market has not cooled to 3D printing by the time ExOne goes public, regardless of its financials, I’m sure the IPO will be (at least initially) successful. This last year, all you have to do is whisper the word 3D printing and a company’s stock will react positively. Take a look at microcap Arcam AB (AMAVF) out of Sweden. It went most days since its recent IPO without trading any shares — and I mean zero — until someone on Seeking Alpha wrote a story on them, and then another story, and the stock popped from around 10 to Friday’s close of over 27 over a time of about six weeks. Microcap stocks move easily on hype and news. And ExOne’s tiny $75 million share float will make it a microcap stock as well.

Stay tuned for the fireworks. No word yet on when it will go public.