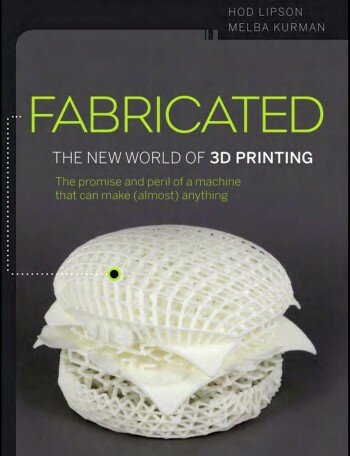 Ok, so I’m jaded. I’ve worked in digital fabrication for many years and the hype surrounding 3D Printing gets me going. Here, I try to bring a balanced voice to the fray. So when I got a review copy of Fabricated, The New World of 3D Printing, my first reaction was Oh Pleeeeaaaase! So I put off the review, hoping it might go away.

Then I heard Hod Lipson speak at the White House Science of Digital Fabrication meeting at MIT’s Center for Bits and Atoms, and here was a guy who understood my space. I work in the Meso scale, between 1 and 200 microns, an area almost no one ever discusses, until they need something practical fabricated. I bonded with Hod instantly, and read the book the minute I got home from Cambridge.

Yes, Fabricated gives the non-technical reader a glimpse into the future of digital manufacturing, and 3D printing in particular. Maybe we will be able to 3D Print blueberry muffins in the future and the “FoodFabber” will get the ingredients right for my body type. Cool. But I belong to the generation that thought by now our cars would drive themselves…remember the Jetsons? So I am not impressed by the futuristic views.

But I am VERY impressed by the practical next steps in 3D Printing described in the book, a process called “voxelizing” material.

In the broadest definition, voxels are similar to pixels, the “Picture Element” from which digital images are created. In a phone interview, Dr. Lipson clarified, “the name voxel has been around for decades. It’s just a building block for 3D objects.”

But what is key to Voxels is that they are repeatable. Dr. Lipson goes on to explain, “While it’s convenient from a computational point of view, the more important point is that repeatable objects can be assembled very quickly.” And fast assembly is key to next generation fabrication.

Right now in Dr. Lipson’s lab 100 Voxels have been assembled simultaneously. He says it takes about a minute so it’s easy to extrapolate than when working in a lattice, we will someday be able to assemble a million per minute. Now, that’s cool!

“I’m not kidding myself that it’s easy…we still have a LONG way to go – this is a proof of principle. But more than that it’s a different way of thinking about assembly. We’re bridging self-assembly of nano-assembly and pick and place of macro-assembly to something totally new.”

Whether you live in the 3D Printing and digital fabrication worlds, or are trying to figure out the truth from the hype, Fabricated gives all of us something new to think about!