Material costs, while still relatively low, can be one of the more expensive aspects of owning and operating a 3D printer. In fact, with professional 3D printers, many companies are opting to make the printers more affordable while putting a larger markup on the proprietary materials, which obviously makes operating the printer more expensive in the long run. Fortunately, this does not apply to most personal 3D printers because their manufacturers don’t produce the spools of filament, even if they sell them; there are a couple exceptions, like 3D Systems’ personal printers that use proprietary spools that are more expensive than standard filament. Still, spooled filament costs more than the plastic it’s made out of.

Right now, ABS is about $15/lb and PLA is about $18/lb. Plastic pellets can be sourced for less than $4/lb in small batches, and less if you buy in bulk. If there was a way to turn pellets into filament, makers could save oodles on materials. 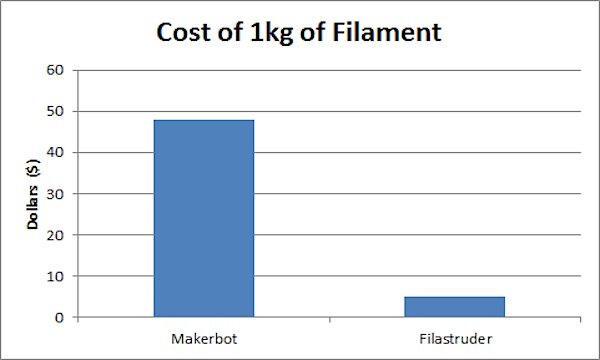 Oh wait, there are ways to do that! Several people have taken on the worthy task of creating filament extruders. First there was the Filabot, which after almost a year and a half has still not been delivered to frustrated Kickstarter backers, though Tyler says he’s still building them. Hugh Lyman won $40,000 for his open-source design of an extruder, which is on Thingiverse. And an extruder called RecycleBot is also on Thingiverse. Now though, for those that don’t want to build one (or wait for the Filabot), there’s another extruder on Kickstarter called Filastruder.

If you can get past the dubstep, the campaign video is pretty entertaining. Tim Elmore is a PhD student at the University of Florida studying Mechanical Engineering. His experience with 3D printing, and having to buy filament, is what spurred his interest in creating a filament extruder. He did his research on all of the extruders mentioned above and refined their designs to create an alpha unit; four of those units were sent to makers for testing. Their feedback led to the beta version, of which 12 were sent out for testing. After hundreds of hours of operation and plenty of feedback, Tim put the Filastruder on Kickstarter, where it was funded in an hour. That gives some indication to the high demand for such a machine.

The Filastruder can produce two to five pounds of filament in a day, in ABS and PLA. By adding colored pellets, any color can be extruded. It’s clear that Tim has done his homework here, and I’d say there’s a good chance that the Filastruder beats the Filabot to market, especially considering that Tim has partnered with OS Printing LLC to assemble the Filastruder. It’s also available as a kit, though. At $188,000, the campaign is working on stretch goals now, but if you’d like one, they’re $300 fully assembled.