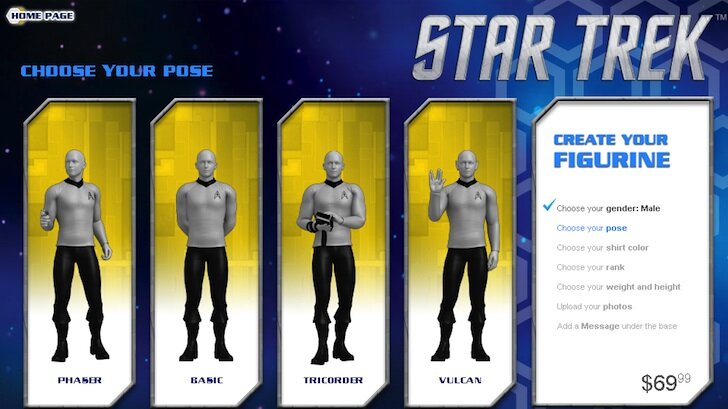 In January, Scott Harmon, Vice President, Corporate Development, at 3D Systems, discussed the partnership between StarTrek.com and 3D Systems that would allow users to have 3D printed Star Trek figurines with their faces sent to them from Cubify. When I reported on the 3DMe service launch, I lamented that the Star Trek version had yet to arrive. Obviously someone at 3D Systems reads this site, because the Star Trek 3DMe app is finally here.

By uploading a couple photos of your face, you can join the Enterprise crew in 5.5 inches of full-color glory. Your figurine will be printed on a Projet 660Pro, so it will have a ceramic like feel.

There are several poses to choose from, and you also select rank and whether you’ll be wearing Command gold, Science blue, or Operations red. Currently all the outfits are from The Original Series, but The Next Generation uniforms will likely be available soon. Hopefully customizable ships, phasers, and tricorders will come along eventually.

At $69.99, they’re more affordable than a lot of Star Trek merchandise and way more personalized, so they’ll make great gifts for your Trekkie friends. You can even add a message on the bottom like “3D print and prosper.”