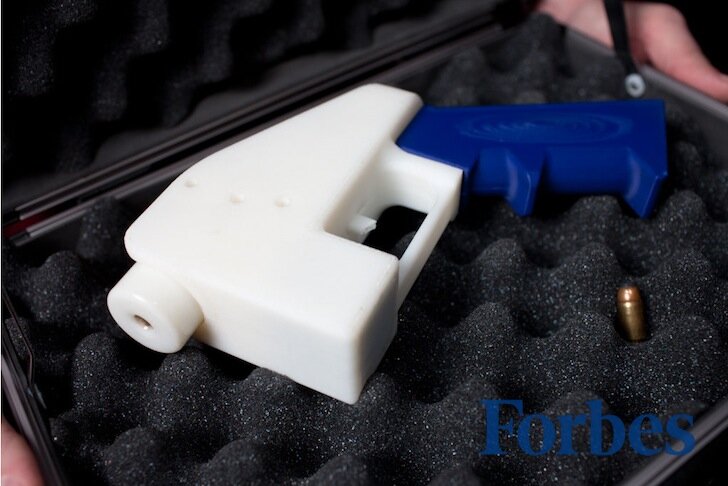 Likely tens of thousands or more news outlets and websites have cheered, and mostly feared, Cody Wilson’s quest to 3D print an entire, working gun. With the exception of a small household nail (firing pin) as the only one of the gun’s 16 parts not 3D printed, he has successfully reached his initial goal.

Wilson gave Andy Greenberg of Forbes an exclusive pass to watch the first test firing and to report on this shot that will be heard round the world in no time. Just moments ago, the article appeared on the Forbes website. Here’s how Greenberg begins his report on how it all went:

Before “three” arrives, a shot reverberates across the overcast central Texas landscape. A tall, sandy blond engineer named John has just pulled a twenty-foot length of yellow string tied to a trigger, which has successfully fired the world’s first entirely 3D-printed gun for the very first time, rocketing a .380 caliber bullet into a berm of dirt and prairie brush.

“Fuckin’ A!” yells John, who has asked me not to publish his full name. He hurries over to examine the firearm bolted to an aluminum frame. But the first to get there is Cody Wilson, a square-jawed and stubbled 25 year-old in a polo shirt and baseball cap. John may have pulled the trigger, but the gun is Wilson’s brainchild.

An extended video by the BBC, who meet up with Wilson:

All the parts that make up the gun, including one standard nail:

I love the name of the gun — the Liberator. It’s named after the one-shot pistols that the Allies designed during World War II that were to be airdropped over France to help them battle the Nazi occupation. With the government increasingly moving to take away our freedoms and guns, the timing of the Liberator couldn’t be better. There is no defense against a tyrannical government when its citizens are unarmed.

No time to write up full-on article for this, so go to Forbes to read the whole story.

Want to download the files to print your own? Go to this DEFCAD page.

Click to read our past articles on Cody Wilson.