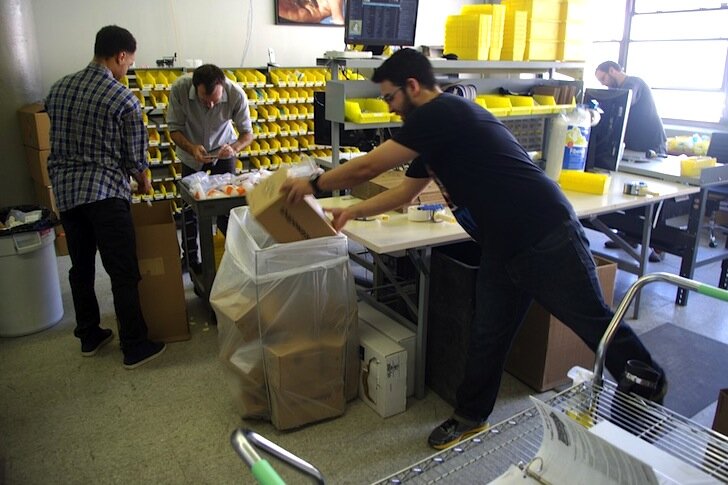 Those of us paying attention to the world of 3D printing know what’s going on over at Shapeways. The company’s growth is exploding, it’s in the sweet spot of the third industrial revolution, and it’s right here in the good ol’ USA.

In the last year in particular, most financial magazines have taken note of 3D printing, often referred to as additive manufacturing. And this week Forbes dug deeper and took a look at a company in the middle of it all — Shapeways. They sent Andy Greenburg to their Queens, New York production facility for to interview with Shapeways “designer evangelist” Duann Scott.

For those unfamiliar with Shapeways, it is a 3D-printing-as-a-service company. Its primary business is to print 3D models uploaded from customers on their very high-end 3D printers, and then ship them back to the designer. But another area of the business is to allow designers to post their designs on the Shapeways.com site, in their own stores; then, visitors to the site — designers or not — can purchase a printed model of that design in the available material of their choice. The designer gets a share of the sale. If you’ve ever been to Zazzle or Cafepress to look at the t-shirts stores people set up, it works similarly, but with three dimensional designs. Using another analogy, Duann Scott likes to think of Shapeways as the Amazon of 3D printing.

Forbes’ Greenburg asked why people would use Shapeways rather than their own 3D printers at home. I hope this was just a question for the benefit of the viewers, as tech reporters should understand this. The answer is that through Shapeways you can print your design out on a high-end 3D printer that costs many hundreds of thousands of dollars, a printer with the resolution and choice of materials unmatched in a home 3D printer.

Scott was also asked why set up a production facility in New York of all places — why not China or India? Duann’s answers were quality control, communications issues and simply being nearer the customer. Cost of doing business was not a big concern. And why isn’t it? Because 3D production requires fewer people than does a traditional manufacturing plant, and the employees are high-skilled technicians, not low wage workers; as a result, labor costs are not significantly higher. This is not your father’s production line.

There are other excellent 3D printing services, each serving their own niche areas. But, Shapeways is most definitely on a roll. And, it’s is perfectly positioned to take advantage of the maker movement that is rocking the world of design and manufacturing.

Mark is the founder of 3DPrinter.net. He encourages anyone reading this to submit their own article for publication. Connect with him on his Google+ account. View all posts by Mark Fleming »
« Mixee Me a mini me
If it’s plastic and deadly it may soon be illegal »

5 Responses to “Shapeways: the Amazon of 3D printing (Forbes Interview)”