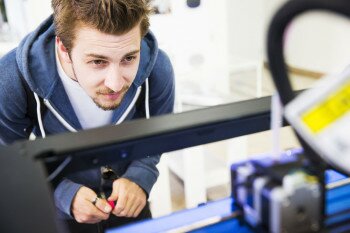 General Electric is getting people excited about innovation.

Introducing the GE Garage project; a series of high-tech, hands-on labs, featuring workshops and hands-on projects to give people a chance to get creative.

As part of their initiative, they are going global with their 2014 tour, which will make its rounds visiting different cities and opening up temporary pop-up labs that are open to the public.

Their latest Garage, the D.C. Garage, has just opened its doors on March 21, in Washington D.C.

GE Garages first started in 2012 as a way to inspire Americans to take part in invention and manufacturing, the program allows for those interested in new manufacturing technologies to become involved and learn alongside experts, opening the doors for creative ideas of their own.

The D.C. GE Garage will run until April 9. It features a collaborative fabrication lab, as well as a skill-building center which allows participants to explore and use its tools, along with a chance to work with technical experts to learn more about how they can take their own ideas to the manufacturing process and. Visitors can also have hands-on experience with laser cutters, 3D printers, and injection molders, and can take part in some of the activities which include creating 3D printed phone cases, or attending a series of workshops and classes.

GE recognizes that technology is changing and they hope to inspire Americans to get involved.