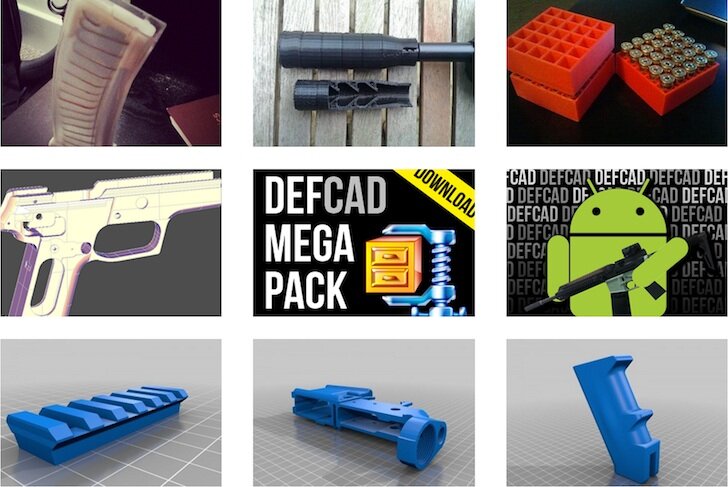 Thingiverse, the 3D model repository owned by Makerbot, recently removed all firearm-related models from their website. In a free society, that is their right, and I have no problem with it. Fortunately, many of the models have found a new home at Defense Distributed’s new DEFCAD site, which serves as a repository for 3D models that specifically relate to firearms. On DEFCAD you’ll find what I count are 28 models, which include such things as an AR-15 grip, a 30-round AR-15 magazine, a Baretta 92FS/M9 frame, and a Glock Sight Press.

Defense Unlimited is a nonprofit, collaborative organization whose purpose is to create freely available plans for 3D printable guns. At the moment, they have plans for gun parts, not entire guns. Although an entire gun is the ultimate goal.

While gun sales have skyrocketed in the last few weeks as people fear the government watering down the second amendment, so has interest in DEFCAD soared. But the site’s web traffic is not just from those who want to 3D print gun parts. It’s also coming from government organizations. In fact, it’s primarily coming from them.

Last week Defense Distributed founder Cody Wilson posted the top domain-level visitors to DEFCAD according to his Analytics data, and it turns out the top 14 were all government institutions; not making the top 15, but coming in at a respectable #17 is the US House of Representatives (house.gov). The top of the list was none other than Big Sis, otherwise known as the Department of Homeland Security (DHS.gov). They are followed by NYC.gov, where Bloomberg must be looking for an encore to his brilliant Big Gulp ban, and NASA.gov where they apparently have time outside of their outreach to Muslims) top priority. Here’s the entire list:

As a defender of the Second Amendment, I think I might want to go check my Analytics data as well. As you can tell, I’m not a big fan of the government and the feeling might be mutual.