I use the term “mind-blowing” alot in this blog because it’s a accurate term for what goes on in my puny skull when I read and think about the future of 3D printing. But 3D printing is just one area of extreme technological advancement occurring in the world right now. Virtually every field is exploding in Kurweilan exponential fashion with breakthrough after mind-blowing breakthrough. One field that will soon enough fit right in with 3D printing is nanotechnology, which can even further move 3d printing into (what once was, we’ll soon remember fondly) the realm of science fiction.

The Huffington Post of all sites recently ran an article in which the author proposed that a new supermaterial could have a revolutionary impact on the world through 3D printing (beyond the already revolutionary disruptive force of 3D printing itself). Huff Po is not a site that I reference for scientific information, but I’m fascinated by the thesis of author John Fleming’s (no relation) article.

The new supermaterial is graphene. Here’s how Wikipedia describes it: 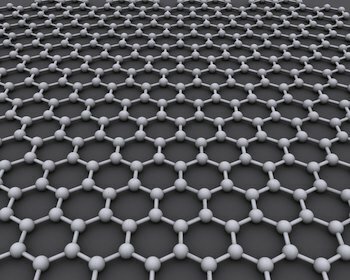 Graphene is an atomic-scale honeycomb lattice made of carbon atoms. Photo credit: Wikipedia.

Graphene is an allotrope of carbon, whose structure is one-atom-thick planar sheets of sp2-bonded carbon atoms that are densely packed in a honeycomb crystal lattice.[1] The term graphene was coined as a combination of graphite and the suffix -ene by Hanns-Peter Boehm,[2] who described single-layer carbon foils in 1962.[3] Graphene is most easily visualized as an atomic-scale chicken wire made of carbon atoms and their bonds. The crystalline or “flake” form of graphite consists of many graphene sheets stacked together.

The Huff Po author calls Graphene the “the joker lurking in the pack … billed as the new super material which will change the world.”

Invented in Britain at the University of Manchester seven years ago, it conducts electricity and heat.

One of its co-inventors, Professor Konstantin Novoselov, says: “Because it is only one atom thick it is quite transparent — there are not many materials that can conduct electricity which are transparent.’

You could stack three million graphene sheets on top of each other and the pile would be one millimetre high. It is claimed graphene could lead to mobile phones you can roll up and put behind your ear. It is tougher than diamond; it is 200 times stronger than steel; it stretches like rubber but, it is claimed, a sheet of graphene as thin as clingfilm could support the weight of an elephant.

The DailyMail.co.uk, where I see the Huffington Post piece drew much of it’s information, also had this important thing to say about graphene:

In terms of its economics, one of the most exciting parts of the graphene story is its cost. Normally when scientists develop a new wonder material, the price is eye-wateringly high.

But graphene is made by chemically processing graphite — the cheap material in the ‘lead’ of pencils. Every few months researchers come up with new, cheaper ways of mass producing graphene, so that some experts believe it could eventually cost less than £4 per pound.

Russian-born Prof Novoselov, 37, believes graphene could change everything from electronics to computers.

‘I don’t think it has been over-hyped,’ he said. ‘It has attracted a lot of attention because it is so simple — it is the thinnest possible matter — and yet it has so many unique properties.

‘There are hundreds of properties which are unique or superior to other materials. Because it is only one atom thick it is quite transparent — not many materials that can conduct electricity which are transparent.’

Its discovery has triggered a boom for material science. Last year, there were 3,000 research papers on its properties, and 400 patent applications.

He then goes on to imagine all the things that could be created by a 3D printer with graphene. Invisible, chameleon-like stealth tanks harder than diamond and 200 times stronger than steel, entirely-printed cars, an so forth.

I’m no nanotechnology scientist, but I do believe we’ll one day be printing objects atom by atom. But for right now I’d like to know more about how graphene or other similar potential supermaterials can be used in conjunction with 3D printing. If you are someone who can shed some light on this, can you please leave a comment below so we can discuss it?