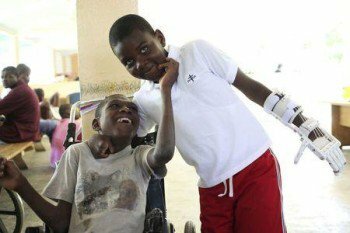 Richard van As’ “Robohand” is making its way around the world.

Developed in 2012, Robohand is a prosthetic robotic hand that is comprised of 3D printed components. It’s open source, so anyone with access to a 3D printer can easily create prosthetic hands and fingers.

With over 143,000 downloads of the open source software, the 3D printed prosthetic continues to change lives.

For Stevenson Joseph, a 12-year-old orphan in Haiti, Robohand has made all the difference. Stevenson was born without fingers on both of his hands, and in a country where programs for those who are disabled are rare, the chance for Stevenson to get treatment was unlikely.

Last year, John Marshall and his wife Lisa were on a mission trip to Haiti where they met Stevenson. Upon returning home, John decided he was going to help. He looked through various information on the 3D printed Robohand, and then together with Richard van As, the Robohand inventor, began to work on designing a 3D printed prosthetic hand for Stevenson.

“Stevenson is handicapped in a small way, in a way that’s not as bad as some of the other children, yet his hands are holding him back. He can do so much more,” said Marshall. “He has the potential.”

It took months of work, and three attempts before the final version was ready. The 3D printed hand was sent to Haiti and the medical team fit Stevenson with it last month.

The 3D printed prosthetic isn’t the best looking one ever, but it works perfectly – and to Stevenson, that’s all that mattered. An orthopedic technician at the hospital says that Stevenson’s function was the most important feature of the hand. “That’s what is in his mind. His robot-hand makes him happy, makes us happy,” said Iwalla.

As for Stevenson, he loves his new hands and is now spending his time getting used to it.

“It is a great hand,” he smiled. “Now I can take a balloon with it. I can score at basketball. I can hold a TV remote and push my friends on their wheelchairs. I can hold a water bottle, a bag. I like it a lot.”