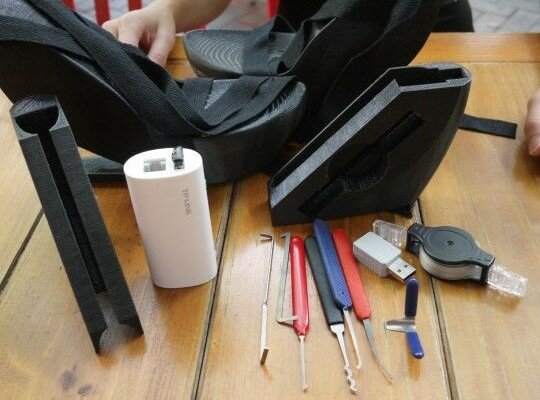 The hacker, who has dubbed herself “SexyCyborg” said that her slinky outfits and shoes go hand-in-hand to evade detection.

“With my shadowless shoes I distract the target with my upper body and they don’t see the real danger on my feet,” she admitted.

SexyCyborg recently published pictures of her heels on the web which have some pretty sophisticated features.

“Each shoe has a drawer that can be slid out without my having to take the shoes off [which] can be customised for various payloads,” she explained.  “My right shoe contains a pen testing drop box which is a wireless router running OpenWRT with a built in rechargeable battery that could either be left running inside the shoe (for war-walking, wifi sniffing and logging) or could be removed and plugged into a convenient open network jack gain[ing] remote access anytime via SSH tunnel.”

She has also released a (somewhat NFSW) gallery showing her at work as well as downloadable files of her shoes so anyone who can pull off such high heels can have a pair of their own.