The 1st ever Maker Faire hosted by the White House took place on June 18, a day that President Obama proclaimed as a National Day of Making.  100 Makers, as both individuals and groups, coverged upon the President’s home in Washington, D.C. to demonstrate a wide range of making activities.  Makers ranged from kids such as Joey Hudy of Marshmallow Cannon fame to real live rocket scientists from NASA.  Here are some of the highlights:

The MIT Center for Bits and Atoms and the Fab Foundation had wheeled a Mobile Fab Lab onto the White House driveway to create one of the larger exhibits at the White House Maker Faire.  A fabrication laboratory with tools such as 3D Printers and laser cutters for digital fabrication, the Mobile Fab Lab is housed in a highly decorated trailer.  Unlike standard Fab Labs in schools, community centers, libraries, and other brick and mortar venues, MIT’s Mobile Fab Lab can move around the country, bringing making to communities. 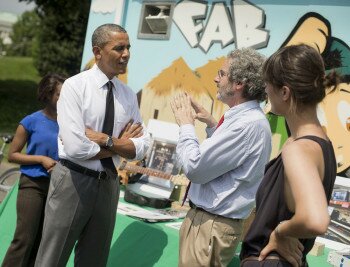 At the White House Maker Faire, representatives from MIT and Fab Labs around the country demonstrated making at its best.  Blair Evans, Executive Director of Incite Focus in Detroit, showed a unique bike.  While bikes are often made in Fab Labs, the bike fabricated by Incite Focus opens a unique business opportunity for its owner.  The cargo section of the bike houses a mobile solar charging station that can be used to charge cell phones, laptops, and other battery-operated devices.  The mobile entrepreneur can ride to a location and locally provide charging services to customers, then move to another location to serve another micro-market. 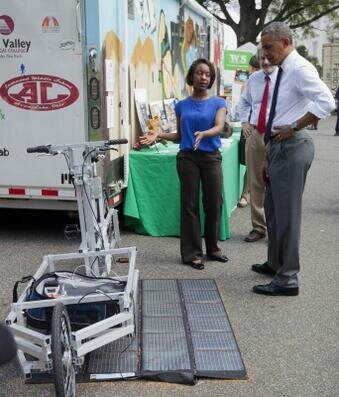 What better way than music to engage kids for STEM education?  In addition to the physics of sound, a multi-school team centered at the CollabNFAB Fab Lab in Dayton, Ohio has created a kit for kids to fabricate their own guitars.  The cool, individualized instruments created by the students can be seen here: http://on.fb.me/1ocvoG1

Fabber/Maker Tom Singer, a professor of mechanical engineering technology at Sinclair Community College also manages the CollabNFAB Fab Lab that produces 700+ guitar kits per year.  In addition to the kits, the team has teacher-training workshops, curriculum, and materials available for other schools to add Guitar Building to their STEM programs. 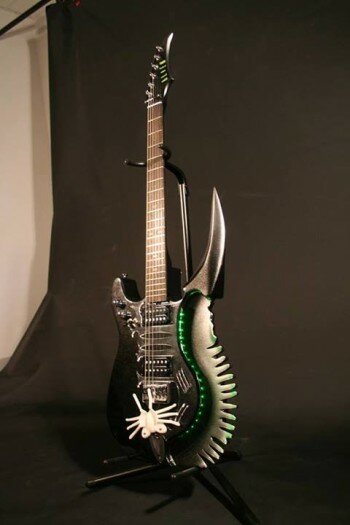 Guitar Created in a Fab Lab 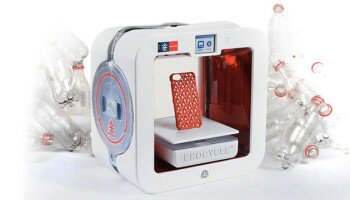 The Maker Movement is really about making a better world and the collaboration between artist/entrepreneur will.i.am, the Coca-Cola Company, and 3D Systems Corporation does just that! At the White House Maker Faire, this exhibit unveiled a prototype of a new Cube printer that turns recycled PET bottles into, well, anything you want to 3D Print! Now this is VERY environmentally-friendly making! Creator of said robotic giraffe, Lindsay Lawlor, of San Diego, Calif., demonstrates his creation for the President.  The 17-foot-tall, robotic giraffe “walks” on wheels and is powered by a 12-horsepower hybrid fuel-engine motor.  It also housed a live cam that fed video through the White House online streaming.

Many congratulations to Dale Dougherty of Make Magazine & Maker Faire and Tom Kalil of the White House Office of Science and Technology Policy for a job well done! Anytime we get the White House backing a movement, we know there will be more to come in the national dialogue! So now, let’s go and make something!