In case you missed the April announcement, two of the largest 3D printing companies, Stratasys and Objet, recently merged into a single company with a $3 billion valuation (compared to the former heavyweight champion, 3D Systems at $2.8 billion). Stratasys won the coin toss for the name, though their higher share count may have factored in too. There are cost synergies and tax savings to be had, but the real bonus to this merger is innovation synergies. For the most part, at first, the two companies’ products and services will be sold separately, just through the same channel, which is convenient. Eventually though, as their joint R&D teams make breakthroughs, we’ll start to see new technologies, materials, and services. Co-founder and former CEO of Stratasys, Scott Crump, became the Executive Chairman of the Board, making room for the former CEO of Objet, David Reis, to fill the role of Stratasys CEO. Recently Reis was interviewed by Investor’s Business Daily, and here’s a summary of that interview:

When asked about the cause of growing interest in 3D printing, Reis explained, “Several reasons: One is a major reduction in 3D printer prices.” He continued, “Another is that governments worldwide realize 3D printing has the ability to bring manufacturing back home. The Obama administration will provide $60 million for additive 3D manufacturing activity. The European Union has a similar program to finance 3D research.” There’s also an emphasis on attracting students, he pointed out. 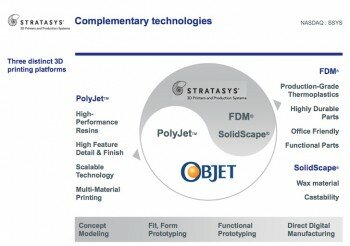 Concerning manufacturing being brought back to the States through 3D printing, Reis was not overly optimistic about doing away with overseas manufacturing in the short term, but alluded to a major change in the process, “I don’t think we’re at an inflection point yet. And I don’t think 3D printing will completely replace traditional manufacturing… What 3D printing will make possible is to add customization. It will automate the first stages of design production, which today is difficult to implement with standard manufacturing processes. This will allow faster production and greater efficiency.”

So who uses 3D printing? According to Reis, “Theoretically, everyone that designs and develops products could use 3D printing.” but that “The biggest users include aerospace, automotive, medical and dental, the consumer market and education.” With a bit of wisdom in his voice he added, “Perhaps the biggest area will be education, because it’s the beginning of everything. You need to train students for them to get into the industry and use those tools”

IBD asked, “Do you foresee 3D printers being ubiquitous in the home?” Reis replied, “I’m not sure what the right answer is here… It’s going to take time, not because of the printing process but because of the materials you’ll need. It’s not like buying ink for your computer printer.” No, I doubt I’ll ever debate over a 3D printer like I do with paper printers on whether I should buy an ink cartridge or just spend the extra $5 for a new printer.

IBD concluded with questions about the global economy, Statasys’ plans for 2013, and if government regulation was impeding the 3D printing industry. Reis responded succinctly, “A lot of our customers use Objet and Stratasys equipment. I see both companies having the ability to cross-sell into the installed base and increase our number of printers in the market… The world clearly in the past year did not fully recover from the 2008-09 recession. But both Objet and Stratasys in most parts of the world were successful and grew at very strong double-digit rates, even in places where we did not expect.” And in regard to choking regulations, “I see it as the opposite. Governments are encouraging 3D printing and additive manufacturing. I see this as a positive. We’re in good shape.” Apparently sometimes the government gets something right.

I’m really looking forward to seeing what this newly-merged company does. Stratasys was the larger of the two, but personally, I like the Objet model more. Objet has a strong focus on multi-material printing, and that’s just so practical for end-product printing, which some companies and industries have already shifted to. The giant Stratasys customer base will surely synergize with Objet’s more appealing presentation of its technology. Any way you look at it though, this is a big move in 3D printing.