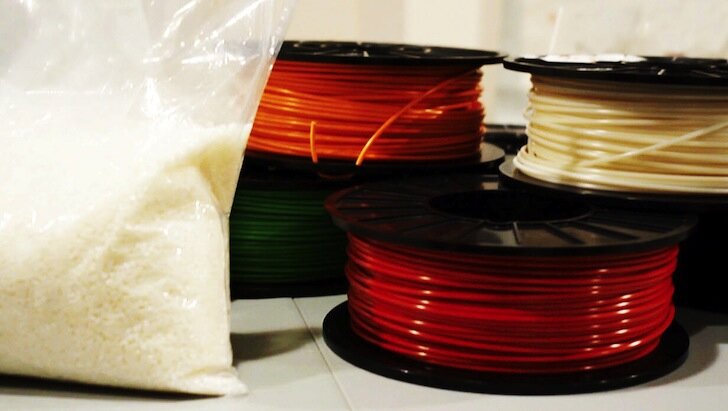 As personal 3D printers are getting cheaper and easier to use, they’re also getting more precise. Printing materials, however, haven’t been keeping up. No matter how good the printer is, its output will never be better than the material that it’s made of. Any number of inconsistencies in the filament can affect print quality, from variances in diameter to contaminants. To address this problem, two engineers are funding the development and production of their own 3D printing-specific filament on Indiegogo.

Michael Cao and Larry Knopp of IC3D Printers have years of experience with various forms of personal 3D printers, and they’ve run pounds and pounds of different filaments from a number of sources through several types of hot ends. They know filament. They’re aware that most spooled filament is made for plastic welding; plastic welding is performed with a much wider nozzle than 3D printers use, so there’s more room for variation of the filament.

There are four main concerns that need to be addressed to create ideal filament for 3D printing:

Diameter: Most extruders can handle very small variances in filament diameter, but if the variance is too great then the extruder can jam, causing prints to pause or fail. IC3D intends to use two lasers to ensure accurate and consistent diameter and roundness.

Debris: Bits of dust or particulates can also jam extruders. By cleaning pellets and maintaining a spotless production facility, IC3D will minimize contaminants in the filament.

Plastic source: Some ABS is made to be rigid and some is more flexible, but they’re not all equally qualified for 3D printing. With all the filament that Michael and Larry have gone through, they know where to find the good stuff.

Moisture: Plastic is slightly hygroscopic (it absorbs moisture), and water in filament boils and creates bubbles when it goes through a hot end. IC3D plans to dry all pellets and ship filament with packets of desiccant to ensure dryness.

They’re planning to start with 3mm ABS in six basic colors, but 1.75mm, PLA, and other colors will come later as demand dictates. Their campaign JUST met funding, but has a little over a couple weeks left. So if you want some high-quality, American-made filament, they’ve got some affordable packages set up.