The Inside 3D Printing Conference and Expo is currently making its way around the globe, having started in New York. I caught it in Chicago. It was a great event and I’m thankful I could attend. The conference was hosted by Mediabistro, but Hod Lipson, Associate Professor at Cornell University and author of Fabricated: The New World of 3D Printing, organized the whole thing. He did a wonderful job, though it’s impossible to keep speakers from going over their time allotments. Hod told me over 1,000 people showed up for the expo, and some 300 for the conference portion. The conference was broken down between tutorial tracks and presentation tracks, though there was no discernible difference.

The keynote for the first day was shared between Scott Crump, Chairman and Chief Innovation Officer of Stratasys, and Bre Pettis, cofounder and CEO of MakerBot. Scott discussed how he started in his kitchen and garage with a hot glue gun, and his first printed object was a frog; Stratasys now has 22 models and has installed over 30,000 3D printers. Bre also talked about the beginnings of his company with the Cupcake, and how that kit was shipped with an empty PCB board that required its components be attached; MakerBot was recently purchased by Stratasys in a deal worth over $400 million. I talked briefly with him about the Digitizer 3D scanner that’s being developed; he couldn’t reveal much, but it “looks like a spaceship” and will cost “less than a Replicator.” I’ll give a brief description of some of the tracks I attended.

Adding Value to Conventional Manufacturing
Richard Grylls, Senior Additive Manufacturing Specialist at Optomec, spoke about their LENS and Aerosol Jet technologies, and how they’re being incorporated with conventional manufacturing methods. With LENS, metal features can be added to existing components, and components can be repaired. Some can even be made stronger by adding layers of titanium. The Aerosol Jet technology prints very precise designs in conductive materials, and multi-material printing has been tested successfully with up to four materials.

A Microsoft Perspective on 3D Printing
Jesse McGatha, Senior Program Manager at Microsoft, gave a presentation on Microsoft’s role in bringing 3D printing to mainstream markets. In order for 3D printing to gain wider acceptance a few common issues need to be addressed, such as standardization of experience across hardware and software, quality and speed need to be improved, and more materials need to be developed. I asked if Windows 8.1’s inclusion of 3D printing covered SLA printers and Jesse said yes, that drivers from all types of printers would be accepted, as well as laser cutters and CNC machines. I also asked if Microsoft planned to leverage its XBox supply chain for building their own 3D printers, and he said there are currently no plans.

3D Printing Technologies for Tissue Regeneration and Biomedical Sciences
Jonathan Butcher, Associate Professor of the Department of Biomedical Engineering at Cornell University, provided a run-through of the two types of bioprinting used in his lab. One involves printing a mold and then filling it with biomaterial, and the other is just 3D printing with live cells in a hydrogel. Both ways have their own drawbacks and advantages; molds offer more fidelity but are limited to homogenous fills, and direct printing is slower but offers heterogeneous materials through multi-extrusion. Jonathan has had success with combining the two methods as well. His research has produced a tri-leaf heart valve that works well in tests, but he says more materials development is crucial for completely functional analogues.

Before going onto the next day’s tracks, I’ll show you a few pictures of the expo floor. Please pardon the low quality of my out-of-date smartphone camera. 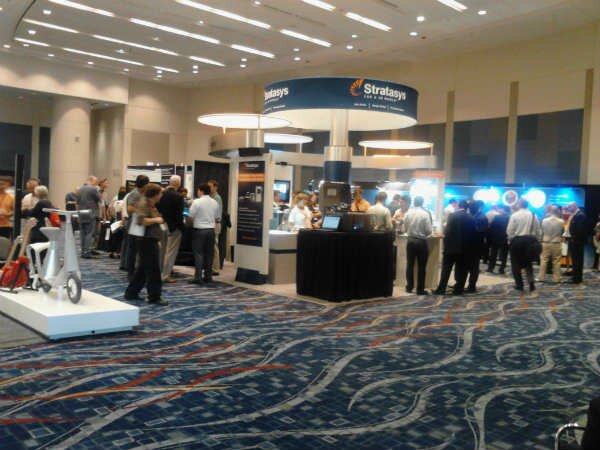 There were lots of people checking out the hardware

High quality castle printed on the Afinia behind it

Become a Storm Trooper or a Disney princess

Or a crewmember of Enterprise

Avi Reichental, President and CEO of 3D Systems, delivered the second day’s keynote on Manufacturing the Future. He detailed the early days when only a few engineers used it for prototyping, and commented on how now every year there are more end-use parts and goods coming out of 3D printing. Avi maintains that 3D printing is advancing at the rate of Moore’s Law, and 3D Systems has taken on the task of pushing development at that pace. He says their printers will get faster, more accurate, easier to use, and cheaper every year, so that a $500 consumer model should be expected in the next year. 3D Systems is also supporting NAMII, having installed some of their best printers in the Youngstown, Ohio annex. The acquisition of Phenix Systems is expected to close in the next few days, giving 3D Systems a powerful metal printing line. Avi also announced joining forces with Chicago’s Innovation Factory to support the city’s bid to become a design capital of the world.

From Code to Cotour
Francis Bitoni is a programmer and Michael Schmidt is a fashion designer; they teamed up to create a 3D printed gown for Dita Von Teese. The entire process took about four months, which included designing it, writing the code for the Fibonacci sequence, and assembling and finishing it. The printing at Shapeways only took a few days. It was printed and shipped in 17 solid pieces that were designed to be flexible. And they were flexible, enough for Dita to sit down in it. What really emphasizes how collaboration is enhanced with modern technologies like the internet and 3D printing is the fact that Francis and Michael didn’t meet until a day before the gown was debuted.

Welcome to NAMII – The AM Innovation Accelerator: Adventures in Additive Manufacturing and Public-Private Partnerships
Ralph L. Resnick, President and Executive Director of the National Center for Defense Manufacturing & Machining (NCDMM) and Founding Director of the National Additive Manufacturing Innovation Institute (NAMII), thoroughly explained the workings of NAMII. It’s a pretty complex structure, but apparently effective. The Youngstown initiative has printers donated and consigned from 3D Systems, Stratasys, Hyrel, and several others. Ralph attributes the success partly to pressure, from the printing companies on each other and from the companies on the government. No tax money has gone to purchasing printers or buildings. The government goes in halfsies on the projects themselves. I expect a lot to come out of NAMII.

The Future of 3D Printing
Hod Lipson gave an enlightening description of using 3D printing for his evolving robots research, and I literally just watched an episode of Through the Wormhole that features Hod and his robots while writing this. He talked about the four episodes of 3D printing: the first episode is about controlling form and shape, the second is the creation of new materials with 3D printing, the third is integrating 3D printed electronics, and the fourth episode is the digitizing of materials. Hod says we’re nearing the end of the first episode, which sounds about right. He’s done some tests that will accelerate the second episode, where two materials were mixed 50/50 in various configurations; each has different strength and flexibility. As more materials are mixed, the amount of different materials that can be created goes up exponentially (or more). The fourth episode is about materials becoming “voxels” that will be printed together like Legos. That will allow objects to posses advanced properties and be disassembled. Hod’s presentation was one of my favorites.

The whole conference was great. Everyone was super nice and knowledgeable, willing to talk about their own projects. There was a lot of talk about materials development and new printers being released soon. If you’d like to hear all this for yourself, the next conference will be in San Jose, CA on September 17-18. Definitely go.