Found one in stock!

The BIG news on Twitter this week was the unveiling of 3D Systems Cube sales at Staples.  This was fantastic news to a non-profit STEAM (STEM + Liberal Arts) group I mentor.  A camp for middle school teachers in Boston needed a few more printers and we weren’t sure that the 3D Systems website order was going to arrive in time.  Photos of the displays and mention that select locations would carry the machines seemed to solve our problem.  We’d just run out and buy the two extra we needed and we were sure our group could absorb the two on order or re-sell them to a sponsor.  Simple, right?  Well, not quite.

We had to find a store that was in this select group chosen to launch the office supply chain into the future.  I tracked the Twitter post back to the Cubify blog, but couldn’t find a list of stores.  Being a left-brained person, I just decided to apply logic and have our staff start calling locations in Boston that might have it.  Cambridge (MIT’s there so that made sense) and Downtown.  Both locations’ tech staff didn’t know anything about the Cube and after they went to ask higher ups, suggested I order online.  Okay, so now I tried New York.  That’s only a 4-hour drive.  After calling six stores, I gave up.

Not easily deterred, I decided to track down Roxanne, who wrote the Cubify Blog post, and ask her for a list.  Long story short, upon hearing my plight the 3D Systems receptionist at their North Carolina headquarters told me she’d find out the locations in the Northeast for me.  I wish I remembered her name, but this energetic woman, took my name and phone number and said she’d call me back.  No one at Staples made that offer.

Call me back she did.  In addition, a tweet I had sent to Cubify was answered with a link to the manufacturer’s FaceBook page with a list of launch stores as well as some recommendations in my area.  I now was armed with a list of stores that I knew had inventory! So I called the closest one asking if they had two Cubes.  No, their delivery had not come in yet and they weren’t sure when they were getting them.  More calls and I found two stores that each had one in stock.  Well they did, before I bought them. 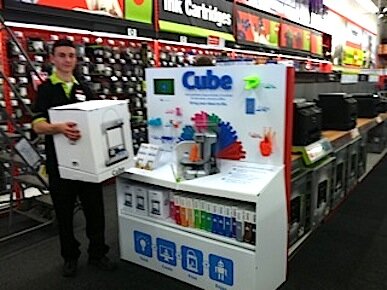 One of the stores was in Salem, New Hampshire and Christina Pernokas, a Staples Easy Tech Associate I met there was knowledgeable about her inventory.  Turns out she handles training for technical staff, but wasn’t sure what training they were getting on the Cube and thought they’d most likely have online training. From what I could tell talking to sales associates no one at this Staples store had ever run a 3D printer, and a few didn’t know they carried them.

That said, Christina was enthusiastic about the Cube and we started to talk about my coming back to do a demo for customers.  Of course, I was wearing my fantasmagorical Cube earrings, printed on my Cube, which proved I was an expert! Across the street at the Apple Store, my earrings spurred a conversation and the sales staff all want to head over to Staples to see the Cube running in person.  Nothing like live demos to get the masses interested in a new technology.

Working in the industry, I definitely am happy demand is so high that finding product is a challenge.  But Staples can take some lessons from 3D Systems’ receptionist on customer service.  And to get beyond the customers in the know to mainstream markets, 3D Systems needs to super-train Staples staff.  Perhaps there’s an opportunity for 3D Systems to collaborate with non-profits like the FabLabHub in New England for live demos and training in Staples stores.