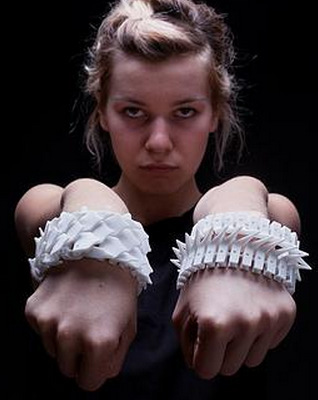 The Bezalel Academy of Arts and Design student’s new line intends to take aim at the issue of violence against women in Israel.

“One out of every four women in Israel suffers an attempted rape. In a study published in May, 2015, 98% of sexual assaults were not reported at all, due to the lack of faith among most of the public in their police force and authorities,” she explains on her website. “This means – there is a problem, but there are no solutions from either the authorities or among the existing proposals for self-defense.”

Kish also hopes when wearing her gear women will feel empowered and better able to defend themselves.

“Women around the world can print the items, wear all or parts of the clothing and be equipped with a ready means for self-defense and survival on their bodies,” Kish said.

Her current line includes a back spike, elbow spike, rope and cable tie bracelet, but she hopes to expand her project soon.

“My dream is to create many additional possibilities for response, including a variety of articles of clothing, connectors and other options for action that will correspond to different parts of the body and to various automatic responses,” the young designer said about her ambitious project to help women feel safer and raise awareness.