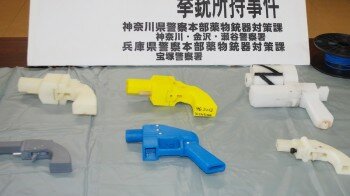 Police have arrested a Japanese man who was in possession of illegal guns which were made using a 3D printer.

27-year-old Yoshitomo Imura, who lives in Kawasaki City, was arrested Thursday after Japanese police raided his home and found five 3D printed pistols. Two of the guns could be loaded with bullets, however no ammunition was found in his home. Models and prototypes for further firearms were also found at the scene.

Imura, who works at a college, said that he produced the resin guns using a 60,000 yen ($589) 3D printer that he had purchased online but he didn’t know that it was illegal.

“I produced the guns, but I didn’t think it was illegal.” Imura told investigators during the search. “I can’t complain about the arrest if the police regard them as real guns,” ANN news reported.

It is suspected that Imura downloaded the blueprints to make the 3D printed guns from foreign websites.

Kanagawa police said that this is the first time that the firearm control law has been applied to the possession of guns that were created by a 3D printer.

Japan has had very strict gun control laws since the 16th century, and makes it very difficult for citizens to own a gun. Most civilians have never even seen a gun. The only guns that Japanese citizens can legally obtain and own are shotguns and air rifles, handguns are strictly forbidden.