Those SpaceGlasses were pretty cool, right? Sculpting 3D objects in a virtual space is an incredibly intuitive approach to CAD, but Meta wasn’t the first company to develop such an interface. Leona3Do was demonstrated at CES 2013; it’s a virtual 3D interface that’s controlled with a 3D mouse called Bird. That same company just launched the beta of a browser-based sculpting tool called Leopoly. 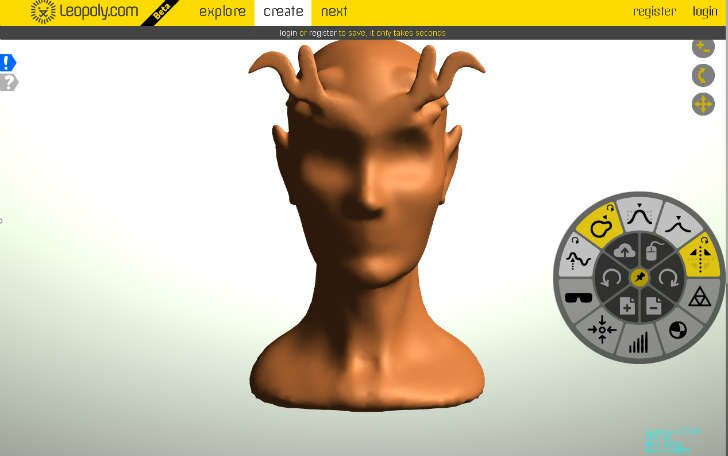 “The idea behind the application is to give you the easiest 3D sculpting tool and a community based game like experience. We hope that we can bring sculpting and digital creation into a whole new level, where creation becomes an easy and fun activity even for beginners in 3D design!”

I’ll say this plainly — Leopoly is the easiest to use sculpting application I’ve ever used. The buttons/tools are clearly labeled and react as expected. And it’s so fast and smooth thanks to cloud computing. It even works in 3D (anaglyph/polarized mode) AND the models can be painted with the same interface. Did I mention it’s free? I modeled the above image (off of a base face) in seconds after visiting the site, no signup necessary. Models can be sent directly to Sculpteo, Shapeways, or makexyz to be 3D printed.

There is a paid version too with extra features. The Next upgrade is $10/month and provides an offline mode, additional sculpting tools, the option to export STLs, a private gallery (all models sculpted with the free version can be seen and modified by others, though the originals are preserved), and compatibility with the Bird. Or a Bird could be purchased for $499 which comes with a year of Next.

And expect to see more out of Leopoly; I was told by a representative “We would like to democratize digital creation and as such, we are going to introduce new features on a monthly basis.”