I first read about Crowdsourcing in about 2010 in a Wired article that featured Local Motors.  Jeff Howe, who coined the term Crowdsourcing, described how communities come together to best big corporations in getting new products out or solving engineering problems.  Well, that was the concept in a nut shell.  In his book of the same same, Mr. Howe gives much more depth to the power of the ability of the “crowd” to solve problems, much like Linux or Wikipedia, but with Atoms instead of Bits.

Entire new business models were springing up as companies created challenges that paid anyone who had a winning solution.  Key to Crowdsourcing is making the challenge small enough so that anyone – read: people with day jobs – had the “spare cycles” – read: spare time – to get creative. 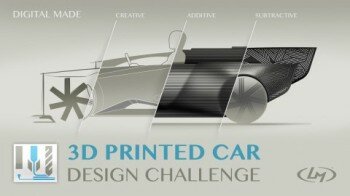 And now Local Motors who have built entire cars with Crowdsourcing, are now crowdsourcing a 3D Printed car to be manufactured at the International Manufacturing Technology Show [IMTS] in Chicago in September.  The 3D Printed Car Design Challenge is meant to speed up time to market through improved design and manufacturing processes.  With about 21 days left until the judging, there are already 28 entries meeting the design requirements entrants must meet for the cash prizes. In addition to $5,000 in cash, the winning design will be brought to the IMTS show where the first car will roll off the er, 3D Printer.

What is most amazing about this project to me, is not the crowdsourcing – we do that all the time, especially in makerspaces and FabLabs – but the new large-scale additive manufacturing tools that will be used to produce the car.  Local Motors has partnered with Oak Ridge National Laboratory [ORNL].  A few weeks ago we heard Carl Bass from AutoDesk speak at Inside 3D Printing about these new large-frame machine tools developed by ORNL with Cincinnati Inc. The innovative Big Area Additive Manufacturing (BAAM) machine “pioneers the use of large-scale 3D printing technology, and is focused on packaging a complete digital manufacturing process in the first machine of its kind” according to the Local Motors website.

Ok, designers, start your 3D Printers!  You only have a few more weeks to enter the challenge!