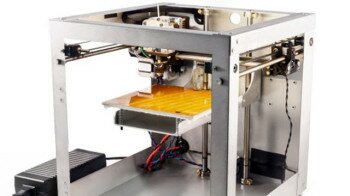 Last week 3Dprinter.net featured an article about a new low-cost printer which stirred up much more controversy then was expected as many users pointed out other low-cost 3D printers that they felt should also have been reported on.  This was an excellent point and so we present a weekly highlight of low-cost 3D printers.   The low cost 3D printer of the week is the Solidoodle 2nd Generation 3D printer.

Made by Solidoodle, this printer debuted in 2012 and was one of the early low-cost pre-assembled 3D printers to go show up on the market.  This cube-shaped printer is capable of printing 6”x6”x6” sized objects out of spooled plastic filament.  They recommend that you print using the ABS filament; however it is capable of printing using PLA.

The real selling feature of this printer is its price.  The base model of the 2nd Generation Solidoodle comes in at $499 with pro and expert versions of the printer pricing at $599 and $699 respectively.  This makes it one of the more affordable printers on the market, and cheaper than the Delta printer as many users pointed out last week.

Of course the low price does bring a few down sides.  The printer only has one print head meaning it isn’t able to do multi-colored printing.  Users have also reported limited support from the company with just a contact email address.  As of now, the company doesn’t have a phone number, forum or blog available with information, updates, or a direct line to support from the company.  It isn’t surprising that a dedicated support staff is missing, considering the fairly low margins they have on this printer.

Those two points aside, this is a very capable printer for single color plastic 3D printing. The company does have newer models, cleverly named the 3rd and 4th generation, but, while they are more feature rich, the price tag does start creeping closer to the $1,000 mark on those models.  If you are looking to get your first 3D printer and want to keep the price down, the Solidoodle 2nd generation 3D printer is a great place to start.