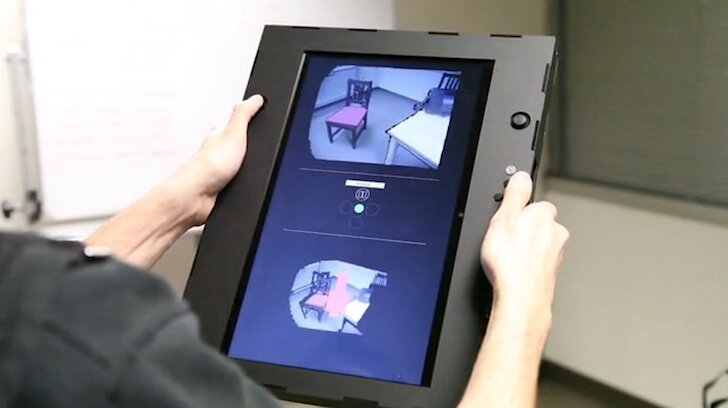 The learning curve for 3D modeling has become significantly less steep over the last decade, but it’s an upward curve still. So what do you do if you want a digital 3D model of something physical, but don’t want to model it yourself? Your only options are to have someone do it for you, which can take a decent amount of time and money, or you could use a 3D scanner, which can either take lots of time OR money. If you go with the scanning option and try to go the cheap route, you could end up wasting a lot of time. If you’d like the process to be a bit less painful, you’ll need to spend tens of thousands of dollars on a professional 3D scanner. At least, that was the case before the Lynx A.

Technically it’s still not available because it still has 32 days left on its Kickstarter campaign, but the good news is that it’s already reached funding. What the Lynx A does is nothing short of miraculous, packing everything needed to 3D scan into a handheld tablet device. It’s the camera, the sensor, the computer, the software (it saves in all your favorite file types: “PLY, OBJ, STL, XYZ, JPS, BVH, and more”), and even the screen to work on. One of the greatest features really is that it’s wireless; I know from experience that wires are not conducive to 3D scanning, and with the Lynx A you’ll have at least three hours of mobile scanning. It’s designed to be as easy to use as a point-and-shoot camera, and the controls are inspired by video games — two joysticks and four buttons.

So what can it do? At LEAST three awesome things: scene modeling, object modeling, and motion capture. The functions are just like they sound too. With scene modeling the Lynx A is just turned around a room, or scene, and it’s captured in real time in color and to scale until the pause button is pressed. The object modeling function does the same thing for a specific object by rotating the device around the object. Motion capture is a bit different though, creating a skeleton of whatever is moving and then the motion is tied to it; that motion can later be mapped and skinned as desired. That’s quite a bit of power for a handheld!

The possible applications for the Lynx A are beyond me, and its creators, but engineers, interior designers, and architects will all want this in their toolboxes. Even surveyors could mount this to a quadcopter and capture macro views of entire buildings. The best thing about the Lynx A though: the price. Since it’s still on Kickstarter, I don’t know the retail price, but I’m guessing between $3000 and $4000, but you can still snag one for under $2000 as an early backer. Even if it’s $5000, that’s a tenth of what other 3D scanners cost. I expect this technology to be in our phones in a few short years, but until then, the Lynx A is where it’s at.